Under the Moons of Mars Turns 100 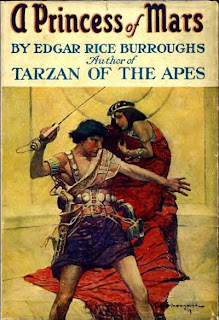 Yep another post for the day, this time commemorating an historic event. It was in February 1912 that Under the Moons of Mars, a sci-fi romance written by writer Norman Bean was first published in the pulp magazine All-Story Weekly and would run for the next five issues. By the end the story would help launch the career of it's writer-Edgar Rice Burroughs, who used the Bean byline out of fear people might think he was off his rocker for writing such a tale-and create a new type of science fiction story that would inspire future writers and filmmakers, including the upcoming movie John Carter. So take a moment to raise a glass in celebration and if you're really curious hit ERBZine for a look at the original magazine http://www.erbzine.com/mag4/0419.html. (Special thanks to the site The John Carter Files http://thejohncarterfiles.com/ for the heads up).
at February 01, 2012