Some Barsoom news from San Diego Comic-Con for you guys. Sideshow Collectibles has released first images of a Dejah Thoris statue for fans with deep pockets to add to their collection. For more images and some of their other items head over to https://www.sideshow.com/blog/immerse-yourself-in-sideshows-official-comic-con-2019-booth-gallery and stay tuned
at July 20, 2019 No comments:

'The Flash' Movie Gets New Writers 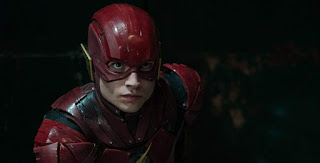 It's been a long while so I might try every one and a while to update. For now some news for fans of the Scarlet Speedster. After a slew of delays Warner Bros has hired a new set of writers-actor Ezra Miller and comic book writer Grant Morrison-to pen the latest draft of the The Flash movie. Reports are Warners decided to let Miller, who played the role in Justice League, to craft a script after some disagreements about the tone of the film. Stay tuned and head over to http://collider.com/the-flash-movie-update-ezra-miller-rewriting-script/http://collider.com/the-flash-movie-update-ezra-miller-rewriting-script/ for more info
at March 16, 2019 No comments: