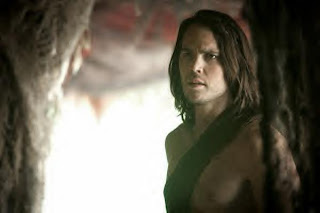 Consider this "John Carter News Bits 6." And please don't shoot the messenger.
First up as I'm sure most of you have now heard or read Deadline Hollywood has posted a story concerning the tracking numbers for John Carter and they're not good. In fact one source says the film could become "the biggest write off of all time." You can judge for yourself at http://www.deadline.com/2012/02/john-carter-early-tracking-shockingly-soft-could-be-biggest-writeoff-of-all-time/.
Next apparently not letting this get in the way, Coming Soon had a brief discussion with producer Jim Morris during a PR event to promote the film where he revealed that some early work has begun on the sequel, which is currently being called John Carter: The Gods of Mars. As the article it quick to point out there is no official word from Disney about this and probably won't be until after the movie comes out. More info is available at http://www.comingsoon.net/news/movienews.php?id=87167.
Finally away from movie news: the Wall Street Journal is reporting that Edgar Rice Burroughs Inc. has filed a lawsuit against Dynamite Entertainment for "trademark infringement and unfair competition" over the company's Warlord of Mars and Lord of the Jungle comics http://blogs.wsj.com/law/2012/02/16/owner-of-tarzan-sues-comics-companies-for-infringement/. There is no comment from Dynamite so we'll see where this goes.
at February 16, 2012

The Deadline article, while probably accurate, is borderline malicious IMO. Let's hope not.
I wonder though, why Disney's marketing has been sort of weird. I think it's partly because Tron Legacy had an all-out, really long marketing campaign and that film was not really successful, that they tried a different approach? And Andrew Stanton seems to be against aggressive year-long marketing as well. And also, why aren't they using his name in the promos? Is it because Finding Nemo and Wall-E were more kid-friendly films and this film is aimed at an older audience? Lots of question marks.
One thing I am sure about- it's going to be a great film.

Oops. MCR, if you have permission, could you just delete my first comment? Didn't mean to 'wallpaper'... (a term used in my country- sorry for my bad english) also, thanks always for all the great research you do.

No problem. Sometimes that happens. And your English is quite good so don't worry about it.

It's a bit late to be after Dynamite for the "Warlord" comic. It's been an on-going series for almost 2 years! I see Disney's hand in this. Sorry Disney but the book is in the public domain. If ERB Inc. didn't have the foresight to trademark "Warlord of Mars" it's too late now. Likewise "Barsoom" appears in the title of a recent unauthorized fiction anthology so I guess it's fair game now too.