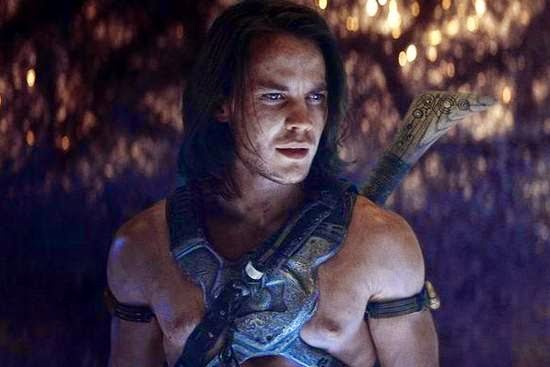 Let's just get to the interesting parts, shall we? In an interview with Variety Taylor Kitsch talked briefly about John Carter, the film's fallout and what he knew about the planned sequel.

On the film's negative reception: "I mean, look man, it wasn’t an uplifting experience. My biggest regret would have been if I didn’t do enough personally. If I didn’t give it everything I had. If I hadn’t prepped enough. I don’t have that regret, so that allows me to let go. I still talk to Lynn Collins almost daily. Those relationships that were born won’t be broken by people we never met."

And on the planned sequel (and pardon the language): "I miss the family. I miss Andrew Stanton. I know the second script was fucking awesome. We had to plant a grounding, so we could really take off in the second one. The second one was even more emotionally taxing, which was awesome."

I guess we'll never know how "emotionally taxing" that film was going to be (I'll bet dead Mrs. Carter is alive, well and shape shifting Super Thern!) but at least I got to give Kitsch credit for his honesty about it. For more about his upcoming projects-including tonight's HBO premiere The Normal Heart-check out http://variety.com/2014/film/news/taylor-kitsch-on-the-normal-heart-and-wanting-to-direct-1201190118/ 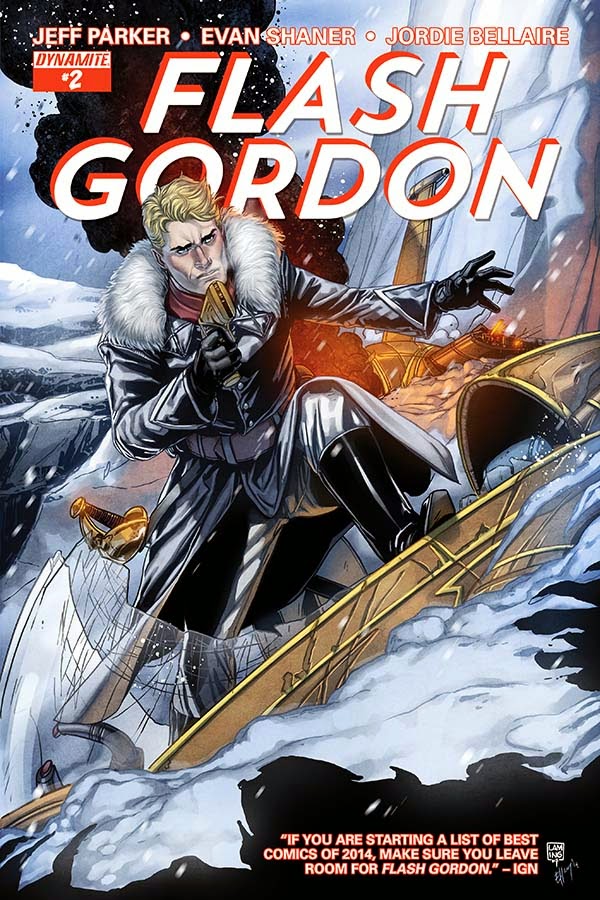 It's Flash time. (I know that makes no sense but I'm out of clever openings.)

After passing themselves off as royal "historians" from Mongo, Flash, Dale and Zarkov find themselves guests of Prince Barin and the Aborians. But Barin begins to suspect there is more to his guests then they claim, especially when he receives word that Ming's search ships are looking for "an enemy of the kingdom...his name is Flash Gordon." Barin deceives the search party and leads Flash and company to the Forge, a production facility for Mongo that produces soldiers for Ming, just not the usual type of soldiers.

Continuing the fun setup of the first issue, Jeff Parker is doing a skillful job balancing the characters and setup with ease and a good sense of humor. I also get the feeling that sense Parker knows most comic and Flash Gordon fans know the setup well he gets to play around with it, adding more offbeat twists to the characters-like making Zarkov a lovable drunk-without sacrificing what makes Flash Gordon work.

Helping out is the bright, almost cartoony work of Evan Shaner and colorist Jordie Bellaire. The pair bring a nice look to the characters and setting of Aboria that helps catch the eye and keeps the momentum going. Some might prefer a more straight or realistic look but I actually like the fact they are not attempting to repeat Alex Raymond or Al Williamson's classic run but coming up with their own ideas.

If you haven't gotten into this series yet, I recommend you do. It's a fun blast or sci-fi pulp that fans will enjoy. Until next time folks.

'Doctor Who' Season 8 Set for August 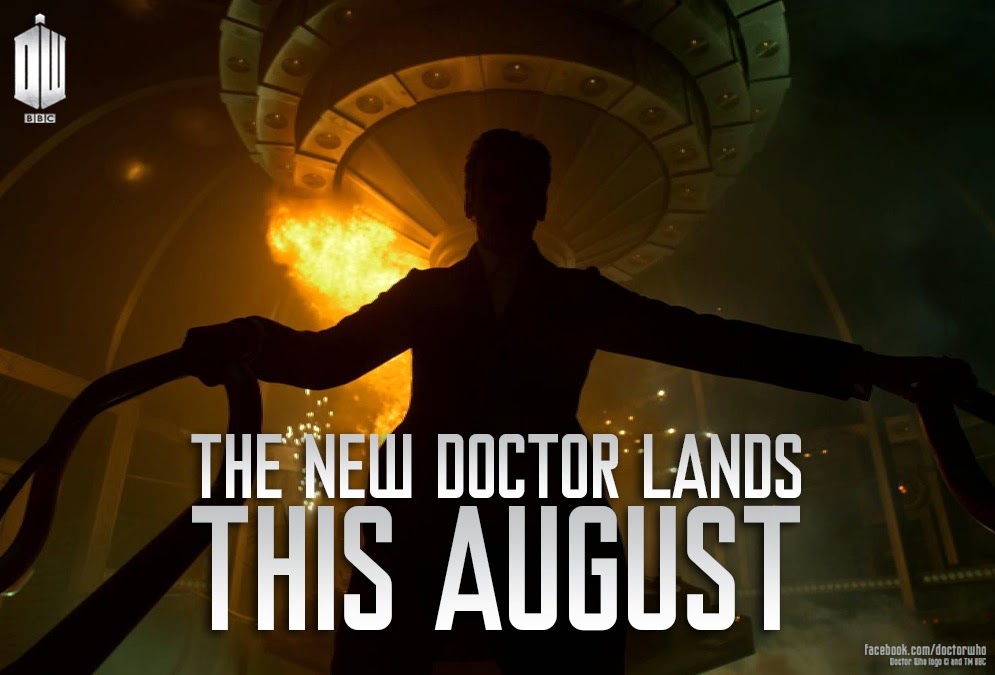 Get ready for more time in the TARDIS. BBC has released a teaser image and a brief trailer announcing the new season with 12th Doctor Peter Capaldi will begin airing this August. Watch the teaser below for more. 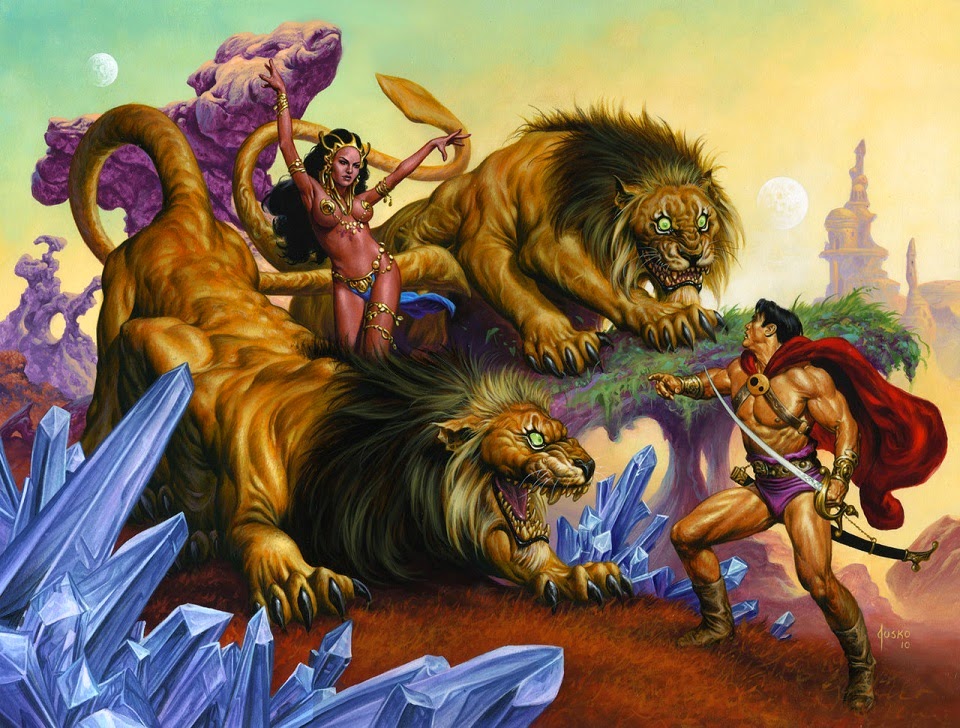 Well this one is a surprise. After two years of legal debate, ERB Inc. and Dynamite Entertainment have settled and are teaming up to relaunch John Carter, Warlord of Mars. Among other things revealed:

*ERB Inc. has reacquired the comic book rights from Disney and Marvel.

* The deal will allow the introduction of characters and situations from the later, copyrighted novels.

*Lord of the Jungle will also be relaunched, though it will not use the Tarzan name.

*The new title will launch later this year with no word yet on the creative team who will be working on it.

*A new John Carter, Warlord of Mars comic strip will be joining the ERB Digital Comic line-up written by Roy Thomas with art by Pegaso (Rodolfo Perez Garcia) and will include various characters from the novels and delve into the history of Barsoom.

There is also no word on the status of the previously announced Dejah of Mars mini-series or the Warlord of Mars #0 one shot so we'll have to wait and see when if either will be coming soon.
at May 20, 2014 No comments: 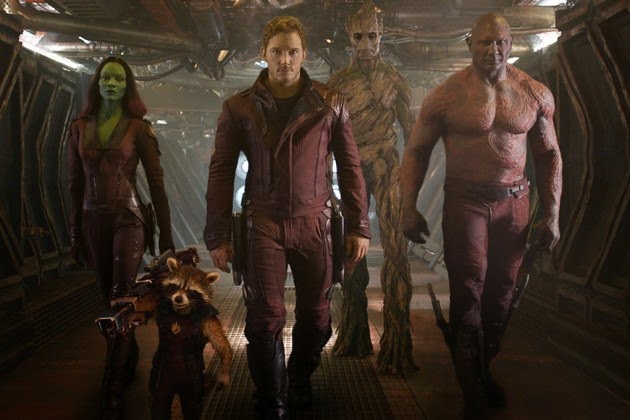 Yep more action, effects, humor and cool music are present in the second trailer. Just sit back and have fun! 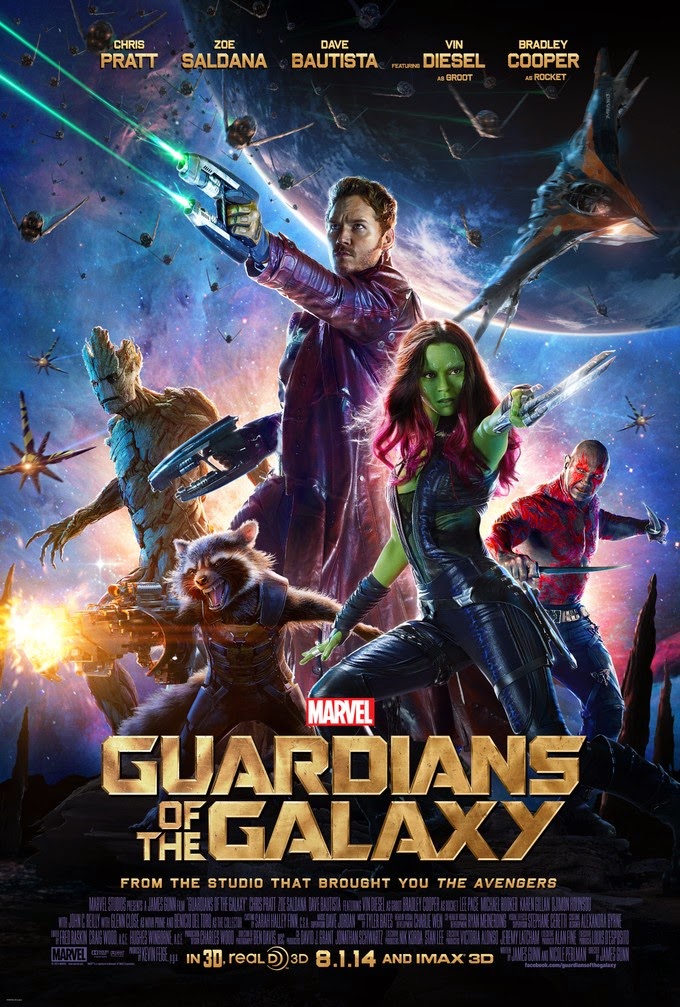 In anticipation of the release of the new trailer this Monday at 10 a.m. PST, Marvel has released a new poster that makes more excited for August 1. Showing off the characters and capturing a vibe similar to the original Star Wars what more do you guys want? We'll see more Monday so have a great weekend and be back for more Guardians then!

The Best of Marvel's 'Star Wars' 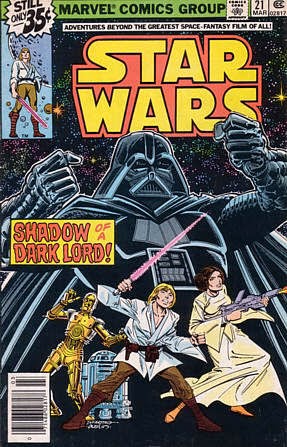 So ready for a blast from the past? What Culture writer Jeff Schuman has posted his picks for the best of Marvel's original Star Wars comic book run, http://whatculture.com/comics/the-10-best-storylines-from-marvels-star-wars-comics.php/. So take a peek and leave memories below.
at May 15, 2014 No comments: 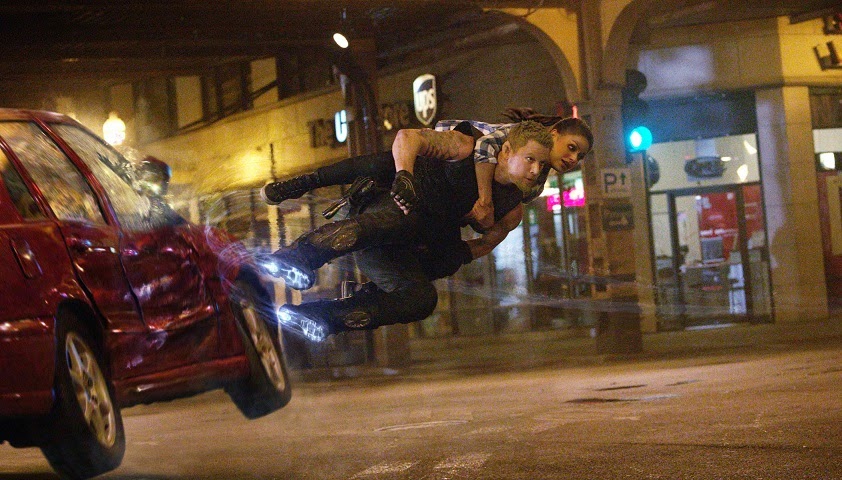 I'll just cut to it. The first clip from the Wachowski's upcoming science fiction epic has it..and it concerns boots. Yes boots. I hope the movie is good since I liked the trailers so far released but honestly this screams John Carter and that "keep it vague" mantra Andrew Stanton kept chanting. Take a peek and leave any thoughts below. 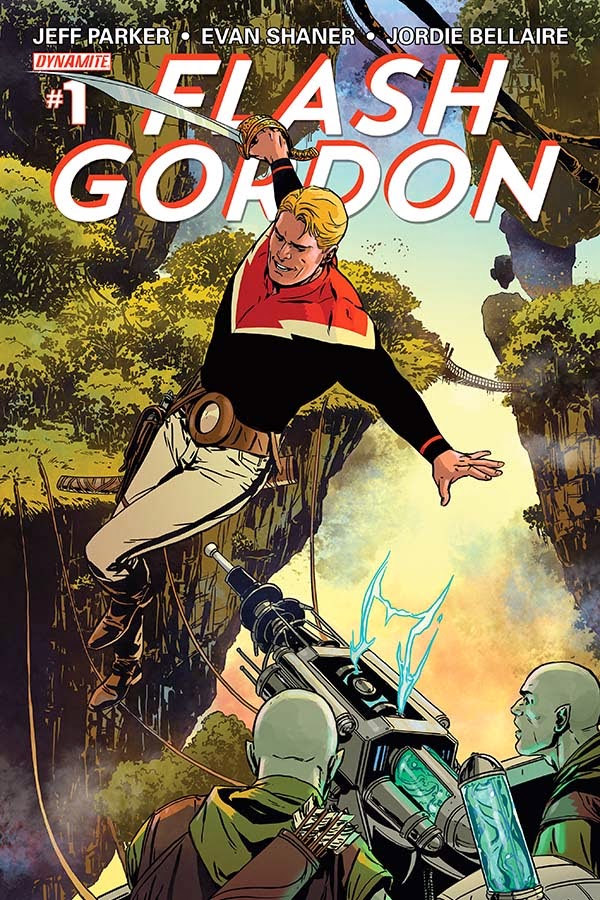 Another belated comic book review folks. This time Flash is back and running for his life.

After a brief setup that introduces feisty reporter Dale Arden, clever scientist Hans Zarkov and party boy Flash Gordon, we pick up with them on the run from a couple of Ming ships. Using portals to zip around, the trio finds themselves on Frigia, an ocean world, a poison gas planet and eventually Aboria, where they become the unwelcome guests of Prince Barin and his men...at least until Dale comes up with a clever ruse.

Dynamite's last stab at Alex Raymond's space hero, Flash Gordon: Zeitgeist, was a mish mash of Raymond's original comic strips with elements pulled from the 1980 film. Here writer Jeff Parker instead uses the recent miniseries King's Watch as the launching point for this new series. Does it work? I'll give it credit for skipping the origin story and instead jumping into the action with breathless speed and fast paced humor, though not of the campy kind. While it's hard to get a lock on the characters, I figure the rest of the series will fill in the holes but for now Parker's done a nice job getting us started.

Helping is illustrator Evan Shaner, who brings a nice look to the series. From the character designs to the fast paced action sequences, Shaner brings flair and splashes of style to this take. It doesn't hold a candle to Raymond's work-but then what does-but it is still a good looking comic book with nice color and panache.

So Flash fans while we wait any further news on that new movie at least this will help pass the time and celebrate 80 years of Flash Gordon and company. Until next time, DEATH TO MING!
at May 09, 2014 No comments:

Book Review: I Am A Barbarian 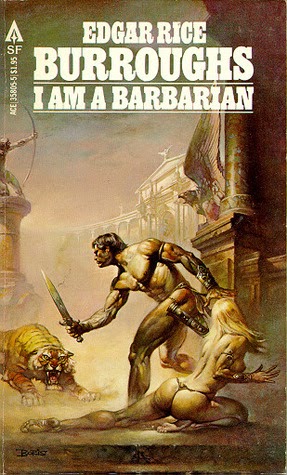 It's been a while since there was an Edgar Rice Burroughs book review so...

I Am A Barbarian tells the first person tale of Britannicus, a captured Briton who from the age of 10 served as the personal servant-or slave-to "Little Boots," a spoiled child and member of the Roman Caesars. Throughout his narrative Britannicus relates the power struggles, conspiracies, violence and death that results in his master becoming Caius Caesar Caligula, the Mad Emperor of Rome.

If you're a die hard Burroughs fan you can skip this part but for the newcomer, I Am A Barbarian was first written in 1941 but it would not see print until 1967 in a limited edition. Afterwards it would come out in paperback form but still is probably Burroughs' least read book. Which is a shame as it is one of the best of his career. Taking a break from John Carter of Mars and Tarzan of the Apes, Burroughs shows his growth as a writer that he got to show little of as I Am A Barbarian has little of the standard Burroughs tropes but instead a gripping tale of palace intrigue, madness and the descent into hell that Rome would suffer.

In fact I would say that the romance is probably the least effective parts of the book as Burroughs doesn't build up much tension, nor is there any antagonism towards Numerious, who emerges as one of Britannicus' best friends. That said Burroughs does deliver a powerful ending that shows a more somber tone not present before in Burroughs' work. 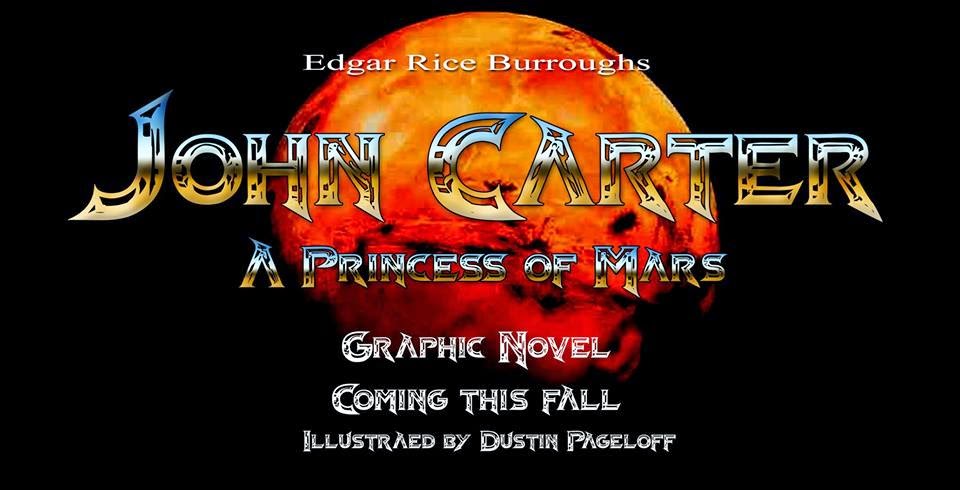 You know because you can never have enough John Carter comics in your life. In this case an outfit called Broken Gear Studios has announced their own upcoming graphic novel adaptation of Edgar Rice Burroughs' novel with a planned release date of this fall. Not much else to go on except check out https://www.facebook.com/brokengearstudios for any future updates.
at May 06, 2014 No comments: 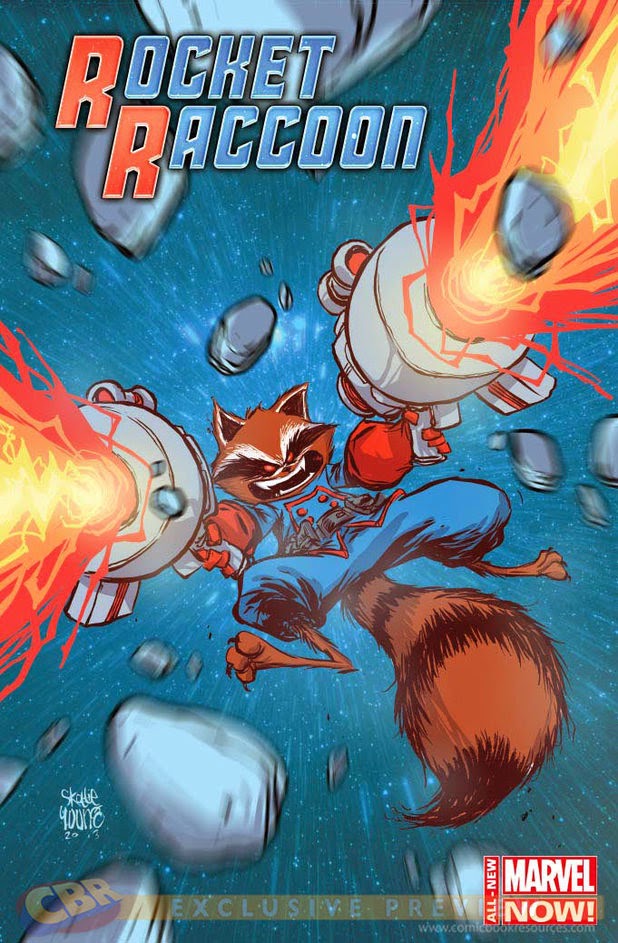 Sorry for the lack of updates but honestly not much has been going on. With that said, here's a story about a raccoon.

In "Business Opportunities" Rocket, Groot the Walking Tree and Mr. Wal-Rus launch a dangerous assault on the Black Bunny Brigade to rescue a princess-correction a "warrior princess" from their clutches. Along the way there is mayhem, stolen crowns and a lot of rabbits.

Released during this past weekend's Free Comic Book Day to help build up promotion for  the upcoming Guardians of the Galaxy movie, this story clearly is aimed at a younger audience than some might expect. In some ways I like that about it, that's a fun, light story and not some deadly serious tale with moping heroes. Writer Joe Caramanga throws in enough jokes, one-liners and references-mostly to another space epic from a galaxy far far away-that readers will leave with a big smile on their face.

Bringing a nice cartoony style is artist Adam Archer, who manages to balance the characters and the action with zany skill that recalls Chuck Jones and Carl Barks at their best. After all how many can capture a raccoon fighting off rabbits, a kingly toad and a walrus and not have fun?

Did I also mention a bonus Spider-Man tale that's just as funny and more entertaining than the mess that was The Amazing Spider-Man 2?

So if you missed Free Comic Book Day, hit your local comic book store and see if they still have any issues left. That's all Folks!