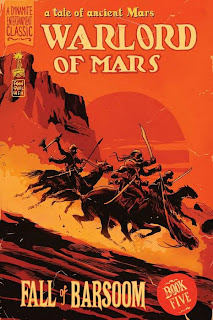 And the comic reviews keep pouring in. This time it's the end of the world as we know it...and the Tharks feel fine.
With the Orovars now facing extinction at the hands of the green hordes, general Van Tun Bor continues to fight to rescue the surviving citizens while the Jeddak reveals his ultimate plan-he plans to hide out in the Atmosphere Factory and allow the green and red men to suffocate outside. Meanwhile scientist Tak Nan Lee has taught the controls of the plant to the red woman Anouk. But when a tribe of red men attack and the Jeddak's plan is revealed, Tak must make a decision that could change the entire face of Barsoom's future...
With this last issue, we get tons of action-Tharks on malagors, giant ulsios attacking, evil Jeddaks and and a crazed scientist with a fondness for cutting people up all adding to a surprising ending. Not to say it doesn't have its faults-the story resolution is a little too pat and the fate of the some the characters a little predictable-let's say there is a noble death and a fitting demise for the bad guy-but overall writer Robert Napton has written a good story.
And like the previous issues there is no complaints about the artwork by Roberto Castro. It's nice and colorful and catches the eye.
So wrapping up, this series is an entertaining "what if" story. It may not have pleased some fans of Barsoom but I found it an interesting storyline helped by some nice turns and good artwork. Final rating: ***1/2 out of 4
at February 01, 2012