John Carter of Mars: The Airships of Barsoom

Another airship from the Paramount area is the pic below, drawn by Phil Saunders. In this case we get a one man flier soaring out of Zodanga which captures the pulpy feel of the stories quite nicely:

Next up is the current airship artwork released from Andrew Stanton's film. Probably the thing that has caused the most confusion here was the "tentacles" or "legs" that are on the sides. A closer look seems to show them as possibly cables to secure the ship to the ground or possibly to help get people on and off easier.

Next up is another sketch from the 1970s Amicus movie. In this case it looks like we have some sort of air current device attached to help get the ship off the ground which makes it look like a giant balloon or blimp. An offbeat design choice I would say. 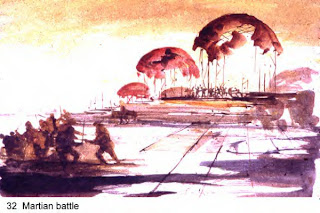 And finally we have well not a piece of artwork but an actual Martian ship. In this case the air ship from the Asylum movie version of Princess of Mars (the pic comes courtesy of http://www.tarstarkas.net). Not the most original design of the bunch-in fact more than a few people said it was too close to Jabba's Sail Barge from Return of the Jedi but given the low budget still quite good all things considered. 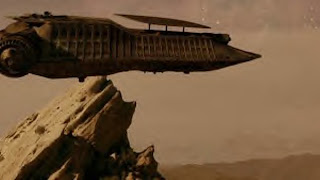 So there we go. Maybe with the release of more concept artwork from Disney we'll do another look in the future.
at July 07, 2011

The 1960's Bob Abbett paperback covers are almost universally acknowledged among artists as the best depictions of Barsoomian ships done to date. I still think they're dead on and the standard to follow.

Your recent Dejah Thoris paintings are stellar, as are your Thuvia paintings. Really great. Who is your model for them? Really cute girl. Your John Carters are a little on the hulky side though, as are your tharks. They look good though. You definitely paint the best banths of any I've seen. I do 3D, and I will be creating a banth next, after I finish a few animation scenes with the Princess of Mars bunch. I may just have to start ordering some comics. Keep them coming. Great stuff. I'm definitely a fan of your work Joe.

Thanks! I'm having fun with the recent Mars stuff. No one actual model for Dejah. Combination of a few different women but the faces are redrawn to suit my particular taste.
As I've mentioned in previous posts I'm following Dynamite's character designs for these covers. My personal interpretations are a bit different, as evidenced by my older Mars work.

Thanks for the kudos on the Banths. I'm pretty proud of them. :-)

Agreed on the fliers. Apparently the "legs" are some sort of "solar sails"- another Stanton inspired change from ERB and a mistake I feel.

It's great to see some of the designs. Michael Whelan is my favourite Martian Tales cover artist, but I must admit he never did much with the 'technology' so to speak. The closest you ever get to seeing a flier is something vague in the background. He excelled at the creature and character look, though.

Love your stuff, Joe! :-D I'm trying to build up my own portfolio bit-by-bit, and I think I should do some ERB stuff... When I was a teenager a friend and I used to design lots of things from the books. The illustrations weren't always great back then, but it's weird to look back at them and see some of the wild ideas we came up with!

Oddly enough, I think the Asylum ship is probably quite good, in emulating Jabba's Sail Barge, since that itself was heavily influenced by what a Barsoomian flier would look like.

I rather liked the hulls of the Stanton ships, since they gave that 'open' feeling needed for the battles and crew as described by Burroughs, but I really wasn't impressed with the feathery solar panels. I think they would have looked more interesting with floatation tanks filled with the 8th ray(If I remember correctly?).

I think my favourite of the images here, is the Ryan Church painting. It's unusual, original, retro and modern at the same time. It would be great to see it coming to life.