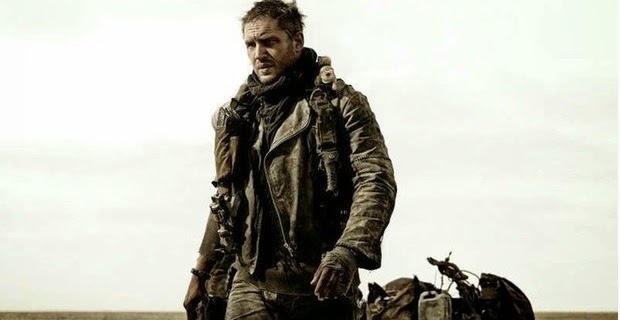 Even though the summer blockbuster season already seems to be underway, tomorrow launches the "official" start with Avengers: Age of Ultron but the summer movie that I'm getting really excited about is George Miller's return to his post-apocalyptic series and now a new featurette is online to build up more excitement. With comments from Miller, new Max Tom Hardy, Charlize Theron and others take a peek and let us know which summer film you are waiting for below. 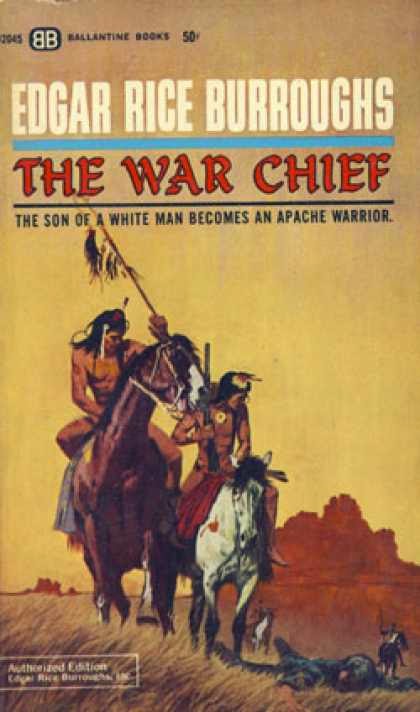 Been a while since there was a book review, so here's my take on one of Edgar Rice Burroughs' lesser read works.

The War Chief tells the tale of Andy MacDuff, a newborn infant who is taken in by Apaches after they kill his parents. Raised by the Go-Yat-Thlay (better known as Geronimo), MacDuff's true heritage is erased as he eventually becomes Shoz-Dijiji, the Black Bear. The rest of his story follows the path of becoming a warrior, the Apaches' conflicts with both Mexicans and Pindah-lickoyee (white man) and the cruel Apache leader Juh. Shoz-Dijiji also learns about love, loss and kindness from two different women, Ish-kay-nay and Wichita Billings and that ultimately each man walks alone.

Confession times folks: I'm not a big reader of Westerns. While I love certain Western movies (like Sergio Leone's work and Clint Eastwood films like The Outlaw Josey Wales and Pale Rider) I never took the genre. Probably it has to do with my dad's constantly making my family watch Gunsmoke, no matter how many times he had seen them. So I never really dug into Burroughs' westerns since I was more a fan of Barsoom than the Old West. But know having read The War Chief, it's easy to see why so many Burroughs fans hold it up as one of his best novels, a tight, sharply observant work that draws both on Burroughs' own experiences in the 7th Calvary in Arizona and actual history (like I Am a Barbarian, which I reviewed earlier, it uses real life people to good and touching effect).

What's most surprising about The War Chief is the approach Burroughs takes to his subject. At the time most novelists-especially the pulp writers-of the period portrayed Native Americans as immoral savages who killed and pillaged left and right. While Burroughs does include scenes of Apache atrocities, he also shows them as human beings fighting to survive against nature and others. In fact the white characters come off as more heinous in their attitudes and actions than Shoz-Dijiji and his tribe does. This balance was decades before Dances With Wolves and other "revisionist" takes on the genre, showing Burroughs as someone ahead of the curve.

If the novel does have its failings its the usual problems Burroughs has. Those who complain his work is episodic will have much to complain about here as the story goes through various conflicts, attacks and events rather than a more straight-forward narrative. I didn't have a problem with that since life is episodic but those who demand narrative drive will be disappointed. Also Burroughs rather clumsily handles the love story of the book, even though one of them is a touching scene, one of the most humane in any of his books.

Even with those failings The War Chief is a triumph for fans and non-fans of Westerns and ERB. Give it a chance and you'll see. Rating: **** out of 4.
at April 29, 2015 No comments: 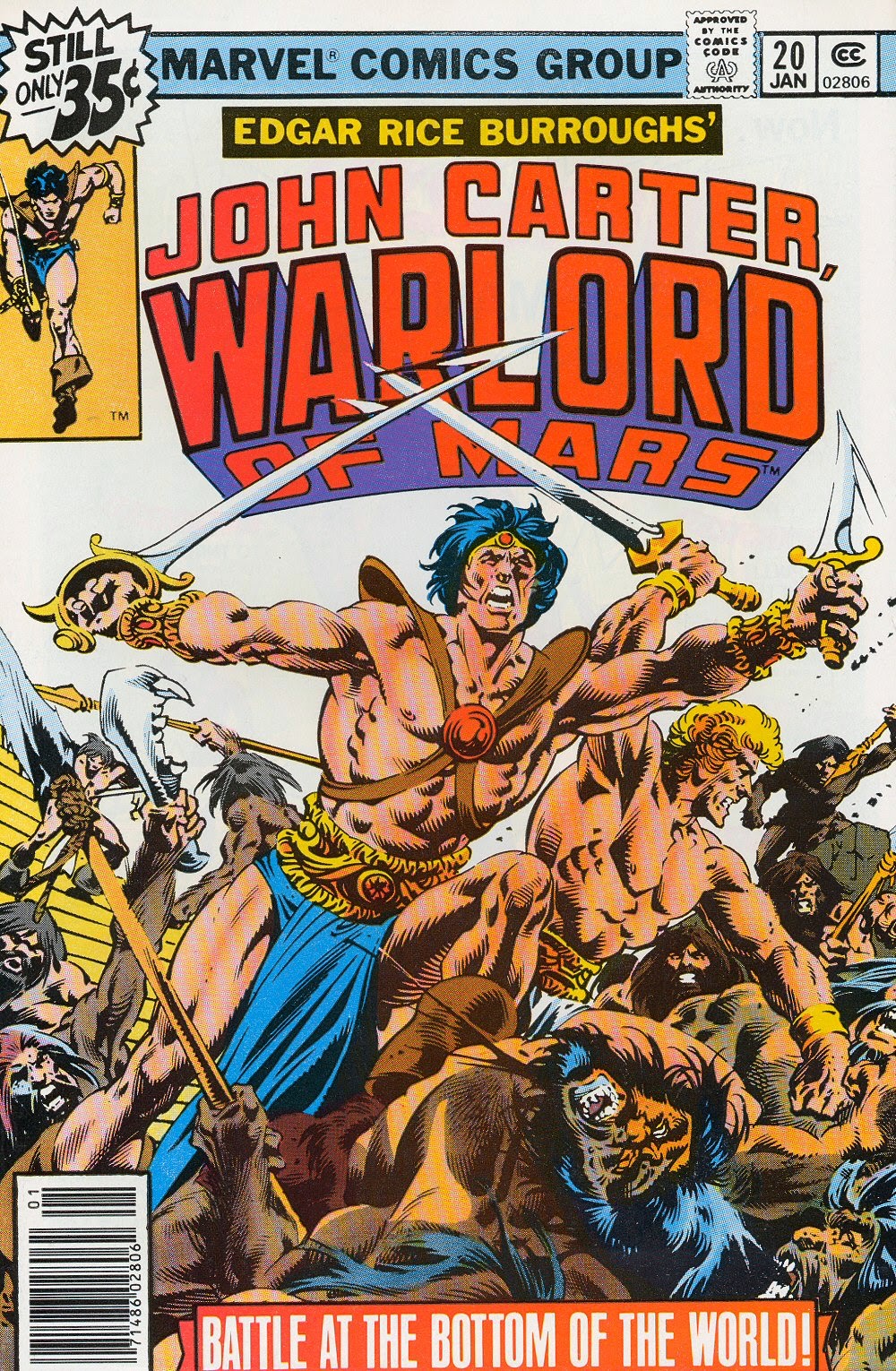 OK we're back with the "Battle at the Bottom of the World!"

Barely surviving the attacking Ptothians and revealing his powers to his new friend Garthon, John Carter leaps to safety and gets a hero's welcome from Garthon's father Gar Karus. Soon he discovers the war is not over, as well as Garthon's secret shame-he likes gardening and poetry over fighting and war. But the two become allies in the struggle while Carter plans his escape from Karanthor with Dejah Thoris. But when he attempts it his famous anger gets the best of him and he slugs sleazy Jeddak Chan Tomar, bringing forth guards ready to slay Carter for his treachery.

Opening with a big battle and closing with near death, this issue thankfully restores some of the fun and ERB-style adventure that was lacking in the past few issues (Tars Tarkas solo adventure excepted). Carter and Garthon's friendship brings a nice balance to the action while Garthon's love for the red slave Hira reminds Carter of what is important. The cliffhanger finale also is good, leaving the reader ready for the next issue. There are some flaws and some unintentional laughs for 21st century readers (especially concerning Garthon and his "hobbies") so just accept the time period it was written to enjoy it.

Ernie Colon's art is also improved, with well defined characters, excellent action and nice designs. They help the story move along and don't distract, even if Dejah's costume resembles something from one of Marvel's other "cosmic" comics like Captain Marvel or Adam Warlock more than John Carter, Warlord of Mars. Oh well, her Barbarella look is still to come.

After some so-so issues this one comes back a winner. Next time "The Lady and the Lion!"
at April 28, 2015 No comments: 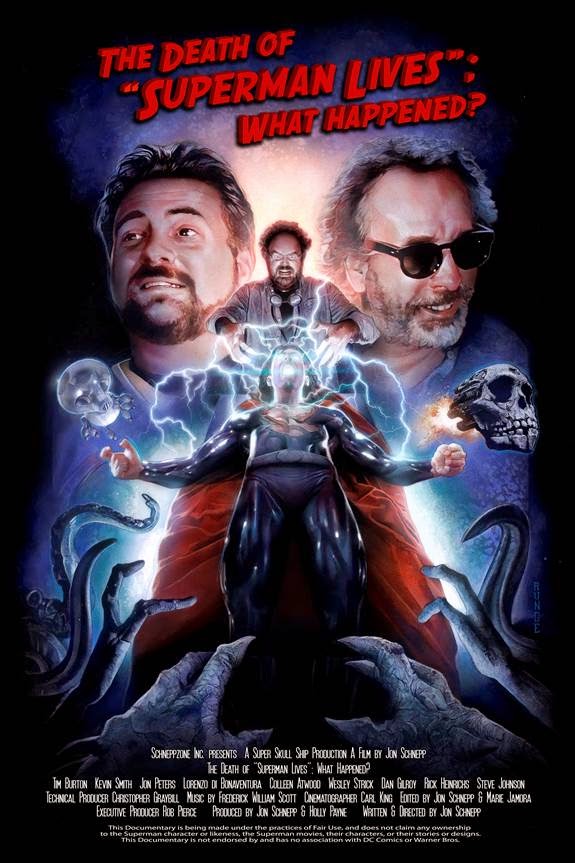 While Batman V Superman is looking more dire, here's the latest trailer for Jon Schnepp's documentary about the infamous 1998 Tim Burton/Nicolas Cage Superman Lives along with the poster for it. With interviews with Burton, writers Kevin Smith, Wesley Strick and Dan Gilroy, producer Jon Peters and several of the crew it looks to be a fascinating insight into an ambitious project that never took off. Maybe when Warners and DC are done killing their big screen universe they might consider this again? Take a look and leave any thoughts below. 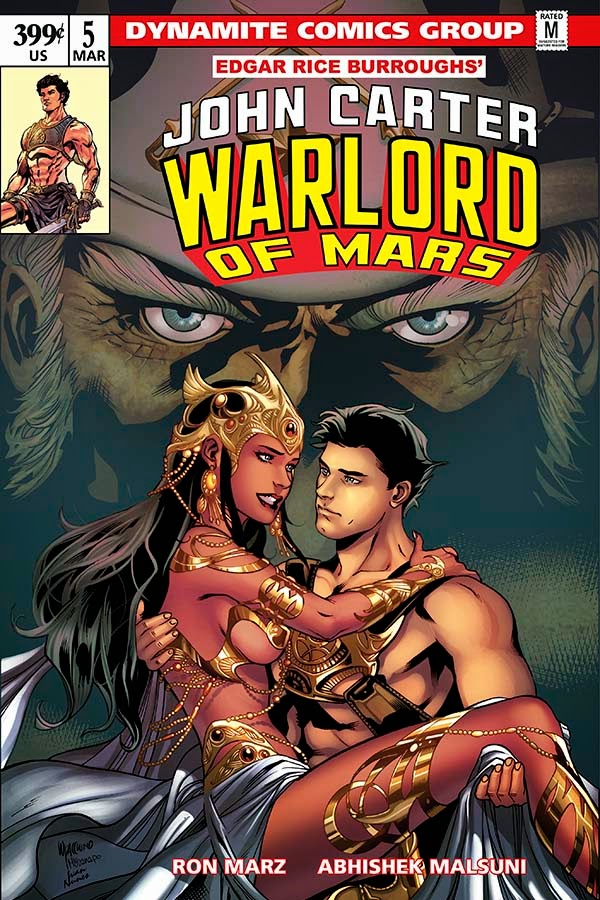 It's near the end here folks as John Carter faces a familiar foe, with Barsoom at stake!

As this issue opens Tars Tarkas, Woola and their new white ape friend are on foot towards Helium when they run into some unexpected Warhoons. Meanwhile Carter faces off with Joshua Clark and barely escapes with just a shoulder wound and Dejah Thoris. The two find brief solace in a cave before Carter returns and offers Clark an offer the egomanical Clark can't refuse: a duel to the death that will decide the fate of Barsoom and John Carter.

Again assisting is the amazing art by Abhishek Malsuni that compliments the story well. From the opening onslaught of Warhoons (who Malsuni actually make frightening looking) to the duels to the brief interlude between John and Dejah, it's a nice consistent piece of work from start to finish.

So folks one more issue to go to see if John Carter can stop the Invaders of Mars. Let's hope it can live up and until next time faithful readers.
at April 21, 2015 No comments:

What more to say except "we're home." Take a peek and get excited for December and leave any thoughts below! 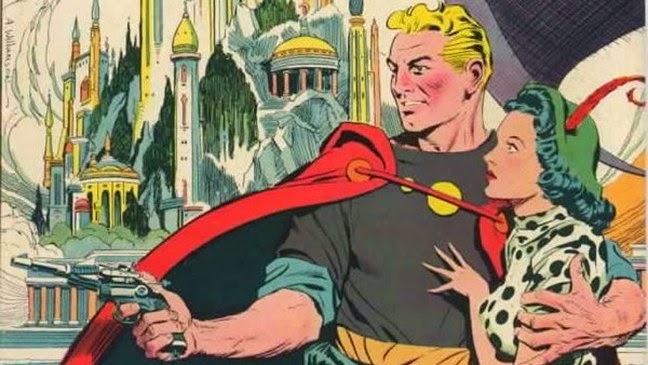 Well maybe. According to the Hollywood Reporter, Kingsmen: The Secret Service and X-Men: First Class director Matthew Vaughn is in talks to direct Fox's reboot of the sci-fi hero http://www.hollywoodreporter.com/heat-vision/matthew-vaughn-talks-direct-flash-788921. Given Vaughn is now a hot property following the surprise success of Kingsmen it would be a coup to land him for both the studio and the project so we'll see where it goes. If you guys have any thoughts leave them below.
at April 15, 2015 No comments: 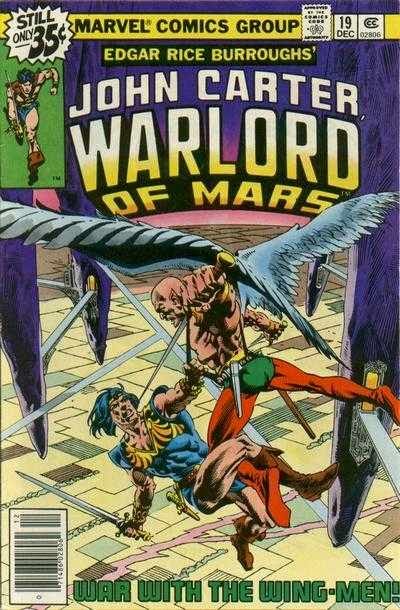 More action and heartbreak in Karanthor as John Carter learns "The Valiant Die But Once!"

Now serving as an odwar in the Jeddak's Guard, Carter has to bite his tongue when he see his beloved Dejah Thoris as a consort to the Orovar's ruler Chan Tomar. Things get worse when alone, the couple bicker about Dejah's actions, leaving John with only one friend, Garthon, who rescues Carter from an assault. Afterwards he relates the history of the Orovars and how they survived despite the drying up of the seas and massive volcanic activity. However they may not survive an attack by their enemies the Ptonthians...an attack that leaves just John Carter and Garthon standing!

This issue is pretty much exposition-from Dejah's attempts to explain her plans to Garthon's history lesson, there is little going on here until the finale. The result is, especially after last issue's strong Tars Tarkas centered story-a lukewarm tale. Instead we get more of the sour "Dejah Cheats on Carter" plot, some interesting backstory on these Orovars and the defending of the wall (why is it always walls? From Tolkien to Game of Thrones, those walls have to stand).

Back handling art duties is Ernie Colon and his work is good but after the excellent job by Frank Miller last time it makes you wish Miller had stuck around for more. It's not that Colon's work is bad-even though in some panels Garthon looks like a blonde Vulcan-but it just lacks that extra touch. Still it's not a total loss and the action packed ending is well done and vibrant.

Prepare for a lot of talk, talk and wall action here. Until next time faithful readers.
at April 14, 2015 No comments: 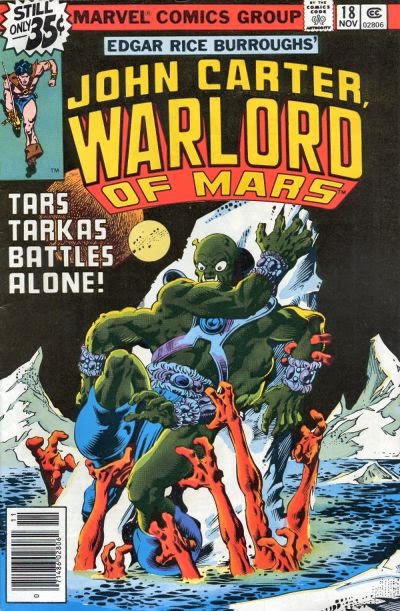 Finally our favorite Thark gets his tale as "Tars Tarkas Battles Alone!"

With John Carter and Dejah Thoris still missing, their friends are in a state of concern when Tars is challenged to combat by fellow Thark Barak Sol in the ancient city of Marahn. With Tars' life and leadership of the Tharks on the line, the great warrior faces exhaustion, a deadly former friend and a surprise that he may not survive...

Except for one little thing this ranks as one of the best of the entire run thanks primarily to Chris Claremont's storytelling, the action packed fight to the death and the development of Tars Tarkas. Giving him the spotlight we see both his integrity and honor while at the same time the conflict between the old ways of the Tharks and the new path forged through his friendship with John Carter and Helium. The finale is also an excellent payoff that sadly was never followed up on (I suspect it might have been if the series had continued).

As mentioned the "one little thing" that does come up short is a brief detour back to Carter and the Hawkmen Orovars as Carter seethes about his situation. The major issue I have (which left a sour taste the first time around) is Dejah's decision to play easy to get to the Orovar's Jeddak Chan Tomar. While this issue makes it clear she is doing it to save both Carter and herself later issues imply more that just goes against the character and her own code.

Probably the thing that will make this issue of interest to comic book fans though is that it marked the first professional job of "guest inker" Frank Miller. Yeah that's right. Long before his classic takes on Daredevil, Wolverine (which reteamed him with Claremont) and The Dark Knight Returns, Miller made had his big Marvel break illustrating this issue and it's a stunner. In fact Miller is one of the best artists to capture Tars Tarkas, making him imposing without going all "Hulk" like or too skinny as in some other comics. Miller's work complements the story without overpowering it and that makes all the difference.

While I could have done without that one plot turn, this is a strong issue in the series and a must have if you don't have it. Until the next trial by combat Kaor!
at April 07, 2015 No comments: