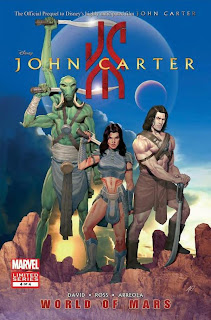 I'm still catching up (and due to some recent changes in finances there may not be as many comic book reviews for a while) so sorry for the late review. That said, let's see how the story wraps-up...and there are some real spoilers so read with caution.
When we last left off Tal Hajus, Tars Tarkas and Laos had finally found the fabled Warhoon Gothan. But as this issue opens it's revealed he's an old man who can't even make the trip to the River Iss. That doesn't stop Tal from brutally slaying him but before he goes Gothan uses a horn to signal one last surprise. The call brings forth the Warhoons-who are busy chasing the escaped Dejah Thoris and Sab Than, a Thark scouting party, and parties from both Helium and Zodanga who are looking for Dejah and Sab respectively. And you can guess where it goes from there-an action packed melee filled with swords, death and narrow escapes.
For this last issue, writer Peter David and artist Luke Ross pull out the stops and deliver an action packed finale. The final battle with Tharks, Warhoons and Dejah and Sab stuck in the middle does a good job of recapturing the action scenes from Burroughs and even tips the hat to the author's frequent use of both coincidence and deux ex machina. There's also a big change in the character of Sab Than and the revelation of what happened to his father Than Kosis that actually works. For all that I have to give a big thumbs up.
Unfortunately there was one drastic change that I have to give thumbs down to and this is really where the spoiler alert comes in. During the battle Laos is mortally wounded and we discover she is Tars' lover...as well as Sola's mother. That's right, no Gozova, no betrayal by Sarkoja-which raises the question of what her part now is-and probably no way that Sola knows who her mother was. To me that was one of the most touching parts of A Princess of Mars but it looks like that has been tossed out. Granted it seems to setup the plot twist of the movie where Tars is the Jeddak of the Tharks not Tal Hajus but still it rips the heart of both Sola and Tars Tarkas' characters.
With that one misstep though the rest of the series was pretty good overall. I definitely preferred the first and this last issue and while there were things I just flat out hated-blitzing Dejah for example and what was mentioned above-it still did a good job of keeping the reader entertained. Final Rating for the entire series: ***1/2 out of 4.
at February 11, 2012

I'm not sure if I like the fact that they even used a different name for Sola's mother. Is her character at all like Gozava's? If not the different name is perhaps a good thing, but if she at all similar to Gozava they should have at least used that name.

And yes, that sounds like it kind of leaves Sarkoja hanging in the air. Maybe she is now just a bitchy older female who just dislikes Sola on principle because she is too nice, and if there is conflict between her and Stanton's Tars it's because she keeps on torturing his daughter. Or something.