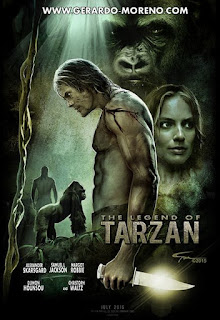 As we head towards 2016 and The Legend of Tarzan some cool fan posters courtesy of artist Gerardo Moreno has been posted. This one showed up on Twitter while he has another one posted on his website http://www.gerardo-moreno.com/ so head over there and check it out.
at December 26, 2015 No comments: 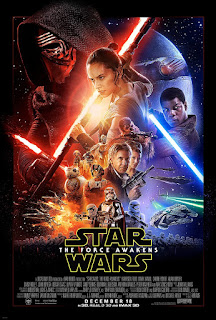 I'll try to avoid spoilers for those who haven't seen it but prepare yourself as the Force is strong with this one.

As the opening crawl informs us, Luke Skywalker (Mark Hamill) has vanished, allowing the dark First Order to rise. Pilot Poe Dameron (Oscar Isaac) has been tasked by Luke's sister Leia (Carrie Fisher) to try to find the missing Jedi, a trail that leads to the planet Jakku. Before too long the First Order and Darth Vader obsessive Kylo Ren (Adam Driver) show up and Poe has to hide his info inside droid BB-8. Eventually the small droid finds a sympathetic human named Rey (Daisy Ridley) and a stormtrooper with a conscience, Finn (John Boyega) to help complete his mission.Some old friends, new enemies and a planet size destroyer also enter the picture as Rey and Finn discover that the old legends are true and the Force has awoken.

While that sounds complicated trust me, The Force Awakens isn't. In fact one of the joys of the film is how director/co-writer JJ Abrams and company make a film that doesn't get too bogged down in plot or exposition-no long winded scenes about trade routes here folks. The film instead tries to recreate the charms of the original trilogy and for the most part succeeds while setting up the future of the franchise. Now it's not perfect but for the 2 hour run time it didn't matter, this was Star Wars again.

What helped was the performances. Both Ridley and Boyega were excellent, bringing feeling and in Boyega's case a welcome sense of humor to his character. Driver also sold his character well, showing a man torn between the light and the dark and not in control of his anger. But the biggest surprise is Harrison Ford, back as Han Solo and selling it. This wasn't the grumpy Ford of recent movies but Han Solo, complete with his trademark wit and bravado. His interactions with Chewbacca (a returning Peter Mayhew) and Leia also brought a smile to the my face and he jolts the movie to life.

The problems I did have it with were minor-some intrusive CGI, maybe too much humor (even though compared to the painful humor of the prequels here it was more hit than miss) and one or two missed opportunities. I can also understand that some feel it's a rehash of A New Hope but otherwise Abrams delivers a successful film that does stand on its own.

I might do a more spoiler filled remake soon as I don't want to spoil anyone's fun as well as see it again since it might change my mind. But for now The Force Awakens is the Star Wars film you are looking for. Sit back and enjoy the ride. Rating: **** of 4.
at December 19, 2015 No comments: 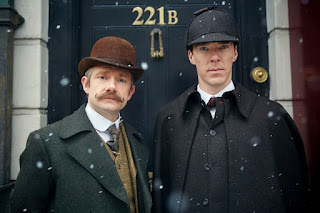 OK Holmes fans, here's the latest preview for the upcoming special. This one does pull back the curtain on the central mystery and gives us more period flavor so take a look and enjoy.

'Legend of Tarzan' Go Behind the Scenes 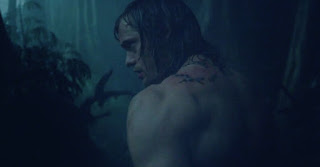 More Tarzan goodness, this time a behind the scenes video courtesy of Entertainment Tonight that shows Alexander Skarsgard, Samuel L. Jackson and director David Yates on the set. Again check it out and let us know your thoughts on it.

'The Legend of Tarzan' Trailer Is Here 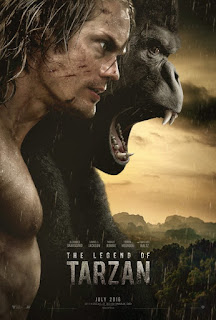 Following the release of the first two pics from the film, Warner Bros. has now released the first teaser poster showing us Alexander Skarsgard and his a hairy co-star baring his or her fangs.  UPDATE: And here it is! While some of the CGI might need tweaking so far so good. The film looks stunning, the action sequences look good and there looks to be an attempt to combine Tarzan with Heart of Darkness so take a peek and let us know what you think below:

'The Legend of Tarzan' First Look! 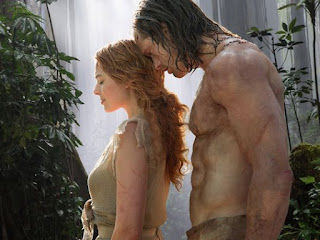 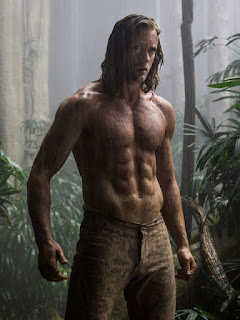 Finally we get our first look! Courtesy of USA Today, we have two photos showing stars Alexander Skarsgard and Margot Robbie as Tarzan and Jane, the revelation of the film's new title,and comments from Skarsgard and director David Yates about the new movie, the approach to the characters and the casting process. Could a new trailer also be coming this week, possibly in front of In the Heart of the Sea or even The Force Awakens? Head over to http://www.usatoday.com/story/life/movies/2015/12/08/legend-of-tarzan-movie-sneak-peek-exclusive/76932268/ for the full story and leave your thoughts below. 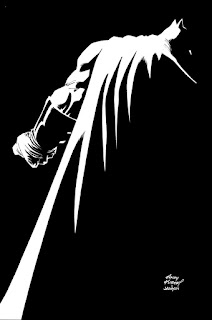 The Dark Knight Returns! OK I ran out of clever openings!

The basics here: It's years since Gotham City last saw Batman and now he's returned and not only fighting crime but the law as well. Meanwhile Wonder Woman is dealing with motherhood and a crazed minotaur, her daughter Lara visits her frozen father and finds Kandor and there is a shocking reveal at the end.

If this sounds really vague, well this issue is too.

Probably like many my coming of age as far as comic books go, came with The Dark Knight Returns, Frank Miller's masterpiece that revamped Batman and left the camp behind. It was as they said a life changing read and still holds up decades later. Less good was the years later follow-up The Dark Knight Strikes Again, a Phantom Menace-sized disappointment that made many lose faith. So does Dark Knight III: The Master Race return us back the glory of the original or is it another slap in the face? So far so good is what I'll say here as Miller and co-writer Brian Azzarello spend this first book setting up the world, if not much of the plot. There's some interesting turns and character reveals, as well as a timely story arc concerning police brutality, so go in with your expectations in check and you might find much here to enjoy.

Helping out is the artwork, a combo of Klaus Janson and Andy Kubert that while it doesn't capture Miller's work from the first one comes close. It has a nice stylized look to it that brings in such varied locales as an urban city, an ice fortress and a jungle while not losing the characters or the action. As anyone who has read this know I'm not an art critic but I know what I like and I like the work here.

The major question is can Miller and company deliver. If you come to this first issue expecting greatness you will probably leave disappointed but if you just take it for what it is then this is a good and addictive opening and hopefully a fitting close to this saga. Until next time faithful readers...
at December 07, 2015 No comments: 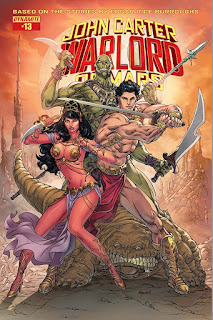 Sorry for the lateness of this review but better late than never as we find "What Lies Beneath."

Now on foot after their flyer gave out, John Carter and Dejah Thoris are going through the desert when they find an oasis. But as Carter says if it looks too good to be true and before they know it they're about to become lunch for a a large tentacled beast that resembles a cross between something out of Lovecraft and the Sarlaac Pit. Fortunately our heroes escape. Unfortunately they find something worse-sleeping Plant Men, ready to hatch and feed.

A pretty simple issue, "What Lies Beneath" is nothing more than monster action, utilizing one of the creepiest creatures from the novels in take off on such films like Alien and The Descent. Honestly that's a good thing as we get a change up from Carter and Dejah having to rescue people from the latest _____ in the blank threat and are instead fighting for themselves. The interaction between the two is handled well (even if Ron Marz and Ian Edginton do resort to the horrid banter from the movie at one point) but all in all a vast improvement over the last issue.

Helping is Ariel Medel's artwork, especially in capturing the desolate look of the desert, the rather creepy Plant Men and our heroes. There is some oddities-like the aforementioned Sarlaac-Cthulu monster-but all in all it complements the story and helps carry it through.

If you're looking for a solid "people in a cave getting attacked by monsters" this tale is right up your alley. Fans of John and Dejah will also enjoy the tension so pick it up if you haven't. Next time more comic reviews and surprises. Until then be safe.
at December 06, 2015 No comments: 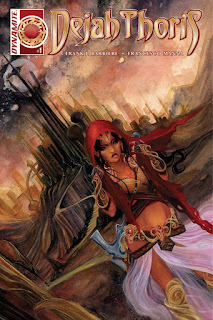 I'll just cut to the chase: Dynamite has released the covers and a brief plot description for issue 1 of their new Dejah Thoris series http://www.dynamite.com/htmlfiles/viewProduct.html?PRO=C72513024475801011. The story here finds Dejah assuming the throne when her father goes missing and discovers shocking secrets. The series launches in February so head over to the link above for those other covers and stay tuned.
at December 01, 2015 No comments: