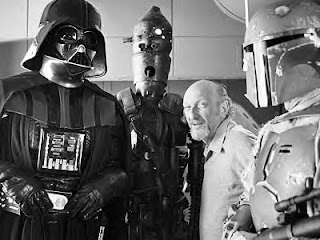 A sad start to the week with news of the passing of two talented men. First came word late Sunday that actor Leslie Nielsen had died of pneumonia following a staph infection. He was 84. While best known to audiences today for his deadpan comic performances in Airplane! and The Naked Gun series, he also appeared in the science fiction classic Forbidden Planet. In tribute MTV's blog site has listed several of Nielsen's best movies http://moviesblog.mtv.com/2010/11/29/remembering-leslie-nielsen-naked-gun-forbidden-planet/ Also gone after a reported long illness is director Irvin Kershner, who was 87 http://artsbeat.blogs.nytimes.com/2010/11/29/irvin-kershner-empire-strikes-back-director-dies-at-87/. A long time filmmaking veteran, Kershner is best remembered for directing The Empire Strikes Back, adding human depth to the Star Wars series as well as the thriller The Eyes of Laura Mars and the non-series James Bond film Never Say Never Again. Both men will be missed.
at November 29, 2010 No comments: 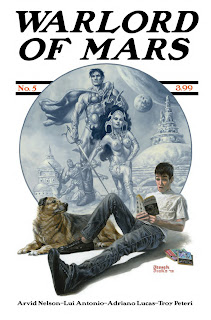 For those in the US I hope you had a safe Thanksgiving and survived Black Friday and for the rest of you guys in the world that you had a good day as well. With that out of the way here is today's cool find-artist Joe Jusko's cover for issue 5 of Dynamite's Warlord of Mars series, done here in homage to the classic Saturday Evening Post covers by Norman Rockwell. Razor-eyed fans might also want to take a close look at the books the young man is reading. For more info on this cover you can read here at http://joejusko.deviantart.com/art/WARLORD-OF-MARS-No-5-187347725?q=&qo=
at November 26, 2010 1 comment: 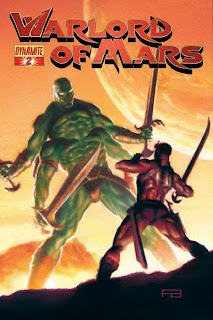 Unless something pops up this will probably be the only post this week until after Thanksgiving. Just FYI. And now our look at Dynamite Comics' second issue of their trip to Barsoom. (Spoilers ahead!)
Picking up where the last issue left off, we now find John Carter and James Powell prospecting when they find a rich vein of quartz. And if you've read A Princess of Mars you know the rest as the first section follows the novel pretty closely-Powell's ambush by Apaches, John's rescue and his fleeing into the cave, etc. The second part of the story picks up on Barsoom with Tars and Tarkas presenting their report to the Jeddak Tal Hajus and coming to blows-literally-over the fate of Sola, with Tarkas being pushed by a manipulative female Thark named Sarkoja...
After the first issue, I didn't really know where this series was heading. John Carter's gun fight with the Union soldiers and the Tars-Tarkas plot twist seemed out of left field but with this issue writer Arvid Nelson turns it back towards Edgar Rice Burroughs. The opening section nicely condenses the first chapter of Burroughs' novel and prepares us for the next issue. The resolution of the Tars-Tarkas conflict and the introduction of Sarkoja are also well handled and again ties in pretty well with the novel while setting up the conflict that we know is coming.
As for the artwork it like the writing has gotten stronger. I know some friends of mine who are big John Carter fans weren't pleased with the Tharks-the lack of antenna and the blank eyes-but if anything it adds to the alien look of them even more. And the final fight between Tars and Tarkas is especially well drawn with blood and severed Thark parts flying-something I sincerely doubt we'll see in Disney's version (that and a buck nude John Carter so you might want to be careful where you read this.)
So in the end this issue is a vast improvement over the first issue. The only complaint-again Dejah Thoris gets prominent placement on most of the covers-except the one posted above-even though she's nowhere to be seen. She better be one hot Martian babe when she shows up!
at November 22, 2010 3 comments:

John Carter of the Cosmos!

I'll have up my review of the second issue of Warlord of Mars tomorrow but here's something to tide you over. In 1980 famed astronomer and novelist Carl Sagan hosted Cosmos: A Personal Voyage, a documentary series on PBS about the universe and for the fifth episode, titled "Blues for a Red Planet" Sagan talked about how the John Carter of Mars books fired his 8 year old imagination and influenced his later fascination with both Mars and the universe. Well thanks to the miracle of Youtube, here's the section from the episode http://www.youtube.com/watch?v=p02Aaq_BaXI, with discussion of astronomer Percival Lowell-whose work influenced Edgar Rice Burroughs on the Barsoom series-and the cool cover artwork by Michael Whelan from the paperbacks. Enjoy the show! (And in case you're curious, the artwork above was a piece of concept art from the earlier Paramount version of John Carter that I've never seen before.)
at November 21, 2010 No comments: 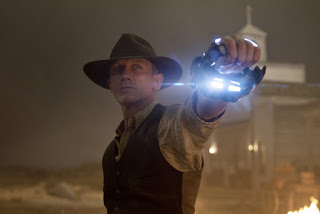 Another post in the same day! Who knew there would be so much video to look at?
Up first is a video walk through of the sets of John Carter of Mars in Utah that was linked to on the blog Warriors of the Red Planet http://warriorsoftheredplanet.blogspot.com/. While not great video quality it still shows off the sets and some stuff we didn't see before.

Next up is yet another trailer, this time for Jon Favreau's Cowboys and Aliens with Daniel Craig, Harrison Ford and Tron Legacy babe Olivia Wilde starring. It looks good and with that cast it should be interesting. 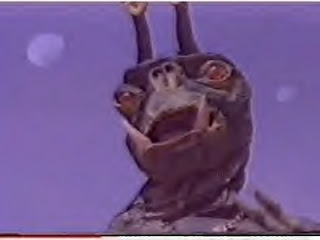 How about some video clips?
The first one up is "The Barsoom Segment," a 7-minute piece of a longer film called Blue Star Red Sand made by the Bournemouth Science Fiction & Fantasy Group in the early 1990s. While it may not have the bells and whistles of a big budget flick it still is an entertaining piece and fans of Barsoom I think will enjoy it. (More info and the pic above come from http://www.barsoomia.org/.)

Next up is the first trailer for next year's Green Lantern with Ryan Reynolds in superhero action, a brunette Blake Lively and our first glimpses of Mark Strong's Sinestro, Abin Sur and Kilowog. So far reaction seems split-some love it, others seem to think it looks worse and that Reynolds was a bad choice. For me it got my interest and for those complaining about Reynolds, considering that Warner Bros considered at various times both Jack Black and Justin Timberlake we should count our blessings. 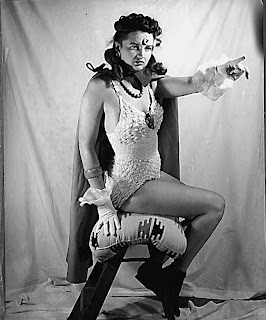 And it's not Lynn Collins or Traci Lords. With news pretty much dried up on the John Carter of Mars movie front (again check the article on SF-Fandom linked to below) I thought I would offer up some glimpses from the past. In this case, the original model for the Sunday comics version drawn by John Coleman Burroughs who happened to be his wife Jane. You can read about her and see some more modeling photos at http://www.johncolemanburroughs.com/jrb/.
at November 14, 2010 No comments:

Is John Carter's PR a Debacle? 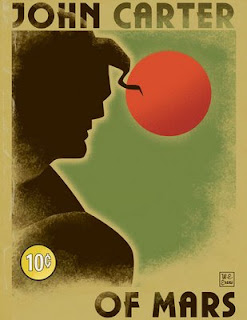 That's the question that is being asked on the site Sf-Fandom by writer Michael Martinez http://www.sf-fandom.com/2010/11/10/andrew-stantons-john-carter-of-mars-pr-debacle/ who wonders why there has been no news about John Carter of Mars recently. For the most part I agree with him (and not just because he has graciously listed this blog in his piece), it seems that everyone involved with this movie-Disney, Pixar and Andrew Stanton-have been hiding this film from the public. We've had two San Diego Comic-Cons in a row with nothing shown (even though Disney has been there 3 years in a row promoting Tron: Legacy), no official website (just a Facebook page that has had no updates forever) and the most we get from the actors is standard "the movie will look great" speak, not to mention Disney preventing concept artwork shown at their D23 Expo in 2009 from leaking out or even the photo of one of the extras in costume that leaked out a few months back which was quickly removed from the actress' IMDB page. Why is this film being hidden? I can understand yes it might be premature to show scenes with needed FX (who wants to see Dafoe in his motion capture PJs?) but the fact that we know virtually everything else about every other big movie coming out in 2012-from constant Hobbit news to casting of the Spider-Man reboot to even pics of John Carter star Taylor Kitsch's other big-budget flick Battleship-you begin to wonder when are they going to start promoting this?
at November 10, 2010 3 comments: 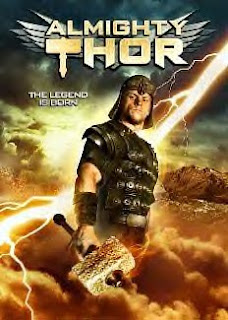 That's right true believers! Our old friends at the Asylum are gearing up their next epic production http://www.thefilmcatalogue.com/catalog/FilmDetail.php?id=10968. I'm just wondering if Commander Canada is coming next?
at November 08, 2010 No comments: 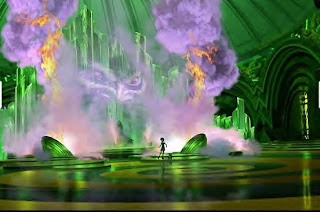 Well I hope you survived the two scariest days of the year (Halloween and Election Day.) And here's something else that could possibly scare you. The Hollywood Reporter has posted a gallery of artwork from Dorothy of Oz, an upcoming CGI-animated take on the classic L. Frank Baum story. This is one of several Oz related movies coming up (including-Heaven help us-Sam Raimi's Oz: The Great and Powerful with Robert Downey Jr as the Wizard) so I guess Hollywood forgot Return to Oz and how poorly it did. You can see the full gallery for yourself at http://www.hollywoodreporter.com/gallery/sneak-peek-animated-dorothy-oz-33465#1.
at November 04, 2010 No comments: