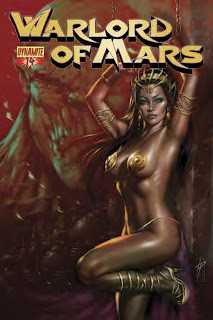 I'll bet you won't be seeing anyone dressed like this in the movie. MTV has posted up a sneak preview of issue 14 of Dynamite's Warlord of Mars series http://geek-news.mtv.com/2011/08/16/dynamite-first-look-warlord-of-mars-14/, so I'm guessing it will be going on past the originally announced 12 issue run and begin adapting The Gods of Mars, based on the plot description: "John Carter learns the shocking truth about the therns, the mysterious sect of priests who control the worship of Issus, the goddess of all Mars. He and Tars Tarkas, the greatest warrior of the green Martians, will have to battle their way through the hellish labyrinth of the therns' temples before they can tell anyone about their discovery. Fortunately for them, they'll have the help of Thuvia, Princess of Ptarth. But even if they free themselves from the temples, they'll have another, even more deadly threat to contend with: an ancient terror from Mars's larger moon..."