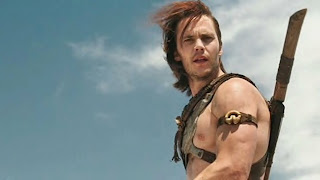 This probably falls into the "no surprise" catergory. Disney and IMAX has announced that John Carter of Mars will be released on those big IMAX 3D screens the same day the film will be hitting regular screens on March 9, 2012. Here's the full press release courtesy of Coming Soon http://www.comingsoon.net/news/movienews.php?id=80838:

John Carter, set on the mysterious and exotic planet of Barsoom (Mars), tells the story of war-weary former military captain John Carter. He is inexplicably transported to Mars where he becomes reluctantly embroiled in a conflict of epic proportions among the inhabitants of the planet, including Tars Tarkas, and the captivating Princess Dejah Thoris. In a world on the brink of collapse, Carter rediscovers his humanity when he realizes that the survival of Barsoom and its people rests in his hands.

"Audiences will immediately feel transported in the epic adventure of 'John Carter,'" said Dave Hollis, Executive Vice President, Theatrical Exhibition Sales and Distribution, Walt Disney Studios Motion Pictures. "Andrew Stanton has envisioned this vast landscape in a way that's not been seen before, and we're thrilled to be able to offer our viewers this film in the immersive IMAX 3D format."

"'John Carter' is a great addition to our 2012 film slate and is sure to resonate with our key demographic," said Greg Foster, Chairman and President, IMAX Filmed Entertainment. "We are pleased to work, once again, with the talented teams at Disney to bring audiences worldwide this groundbreaking film in IMAX 3D."

The IMAX release of John Carter will be digitally re-mastered into the image and sound quality of The IMAX Experience with proprietary IMAX DMR (Digital Re-mastering) technology."