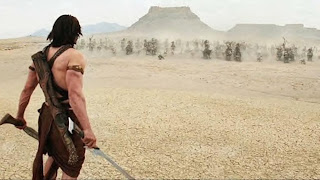 As some might remember a month or so back Empire Magazine announced they would have an article on John Carter of Mars for their September issue as part of their "Heroes of 2012." Well the article hasn't shown up online but I did get a copy today of the magazine. First there was no new pics included, just the concept art and some images from the film's trailer. As for the article here's the high points (and there are some spoilers):

Director Andrew Stanton talks about the name change to just John Carter, which sounds more like PR concerns were the key: "I had no problem at all focusing on who this character is and letting the 'Mars' part be earned during the story and any subsequent films. You can call something anything once people like it."

Stanton on casting Taylor Kitsch as John Carter: "The thing about Taylor is he does damaged goods really well. He's really good with broken characters. And he did an amazing job of making you think there were other CG characters actually there. He's really athletic, so he's got great muscle memory and can act with something that's no there."

The article confirms that Stanton and co-writers Mark Andrews and Michael Chabon has rewritten John's back story and have eliminated the "immortal" aspects of the character. Stanton also mentions that he has toned down (as the writer of the piece puts it) "the crazier plot elements" of Edgar Rice Burroughs's novel to work better as a three act structure. Also Matai Shang (Mark Strong) is described as the "sinister" advisor to Sab Than (Dominic West) and the Zodangans.

Stanton on shooting in Utah: "You can drive about an hour in any different direction and it's completely different geography, the options were endless."

Hey, let's take this wild story about an immortal warrior who dies and goes to Mars, and which has been inspiring writers and directors and such for the last century, and let's make it as ordinary as possible! Yeah, that's the key to success!!

Sorry, but Stanton's starting to cheese me off. I've been trying to take a "wait and see" approach, but damn.

Oh, and it's Xenophile again. He.