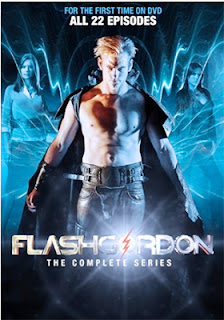 Based on that cover either it's a remake of Flesh Gordon from the 1970s or a sequel to that Channing Tatum stripper flick. Either way here's some news that will either inspire "yeahs" or "you're joking right" responses. Mill Creek Entertainment will be releasing the short lived 2007-2008 Sci-Fi Channel version of Flash Gordon on DVD April 16. The set promotes "ALL 22 EPISODES" with no word on any bonus material. I can't say this was a great series-after all one of the main characters was Flash's mother-but considering the cheap price that Amazon is selling it for I might have to give it a look. For more info hit http://www.amazon.com/Flash-Gordon-The-Complete-Series/dp/B00BHLTIXQ/ref=sr_1_4?ie=UTF8&qid=1363639855&sr=8-4&keywords=flash+gordon