John Carter: A Look Back 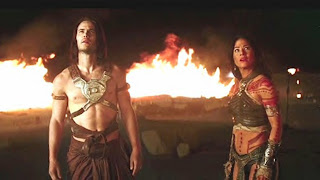 Let's see how much response this gets.

It's hard to believe that's it has been a whole year since John Carter came out and well flopped. Since then it has divided those who either believe that a) it was an unfortunate victim of studio incompetence or some vast conspiracy to have it fail or b) the 21st Century answer to such notorious bombs like Heaven's Gate and Ishtar, a case of ego-in particular Andrew Stanton's-running rampant. It developed fans who fell in love with the world Stanton built and it has spawned a number of detractors, mostly Edgar Rice Burroughs fans who felt that Stanton's stated dislike for certain elements from the books (especially the characters of Carter and Dejah Thoris) colored his film, resulting in a whiny lead character, needless subplots and pointless additions and changes. Yeah you can tell where I fell by that last comment.

So why has this movie resulted in such feelings? Most bombs of the past few years-from The Last Airbender to Green Lantern to last year's other flops Battleship and Dark Shadows-have all faded from most people's view, replaced by the latest rounds of hits and flops. The fans of the film argue it is the hold the film has, the characters and the sweep of it. OK if you say so.

For me I guess why it keeps haunting me is the feeling of what could have been. That so much of John Carter is a missed chance, a movie made by people who had no respect for the source material or thought much beyond building a franchise. Or maybe it is that I've grown too cynical for its supposed charms to work on me. That for everything I did feel was done right or well (Lynn Collins' performance as Dejah; the design of Woola; the arena sequence) so much was wrong that I just couldn't look past it.

Looking back at my original review I feel at the time I was being generous, trying to love this movie since it was getting bashed so much by the press for the bad marketing and lousy tracking numbers. That I wanted this film to succeed to prove to people that Barsoom is a magical world. Sadly as time went on and those feelings began to fade the film began to look more like what it is, an uneven and ultimately unsatisfying film that was in the wrong hands.

Maybe it is time to let go and admit that. To move on and hope that-from this ERB fan's point of view-that John Carter of Mars (yes OF MARS) gets his moment to shine in the Barsoomain sun. That his tale will get his due. Until then I guess we have just to accept Stanton's film for what it is , a movie that could have been great, could have been the next Star Wars and been the one that brought Burroughs to the big screen in grand fashion and fell short. Oh well, maybe in the future it will become a cult classic and I will have grown to accept it.

Until that time we'll just have to pray to the Goddess that the story isn't over. As the real John Carter of Mars says "I still live!" Take that as solace for this anniversary and until next time...Kaor!
at March 09, 2013

I respect that you're a long-time ERB fan, and have to confess that I am not. I only came to John Carter by the way of last year's film, which I loved, and still do. But I really don't think that Stanton et al. had "no respect for the source material," as you state. I think respect for the books is bursting off the screen, even to the inclusion of ERB himself as a character! Yes, some changes were made for the screen story; but to say they were made with disrespect or contempt just clearly isn't the case.

(If you want a movie that has no respect for the source material, you might try Traci Lords' "Princess of Mars" - I couldn't watch more than a half-hour and can't imagine any ERB fans being satisfied with it!)

I did my own one-year retrospective on the film at the blog for which I write, The Sci-Fi Christian - here's a direct link if you're interested: http://thescifichristian.com/2013/03/a-john-carter-calendar-twelve-months-twelve-reasons-to-visit-barsoom/. I'm looking forward to following your blog and reading more.

My vote would be for "future cult classic" but I really have no clue where it will go. Perhaps it will have a legacy, perhaps it will fall further into oblivion, I really don't know.

All I know is that it put Barsoom on the map for all to see in a big way, for good or bad. I just learned that the sales of the first Barsoom omnibus in France were enough to warrant the release of the second omnibus (novels 6 to 11). It's thanks to the exposure to the movie, no douby about that.