Comic Review: Lord of the Jungle #13 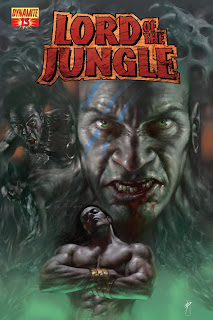 I'll be playing comic book catch up for the next few days, so bear with me. With that out of the way, here's the latest adventure of Tarzan of the Apes...

Having escaped sacrifice, Tarzan is still searching for fabled gold while the Beast Men of Opar swear to find him. Meanwhile Cecil Clayton's attempts to escape has put him face to face in a knife fight with Rockoff, which ends with (SPOILER!) Clayton's demise. But before he dies he reveals to Jane the whole truth about Tarzan, leading Rockoff to go off to put an end to the Greystoke line once and for all. Moving on Tarzan finds the fabled gold vaults of Opar and goes to get the Waziri, only to find them captives of Rockoff. But before Tarzan can be caught, the Beast Men attack, allowing Tarzan and the Waziri to escape, even though they fail in rescuing Jane. With Opar in sight Rockoff leads his troops there and captures La and it appears the city. But Tarzan has vowed to rescue Jane and gets help from the Waziri for a final showdown with Rockoff.

With this issue, Arvid Nelson manages to remain close to the spirit of Edgar Rice Burroughs but does throw much of the plot of The Return of Tarzan out. Here we get massive fight scenes, Rockoff taking Jane and La prisoner, a deathbed confession and much more, leading up to the conclusion. If anything it provides the action that I felt was lacking in the last third of Burroughs' book, especially in providing Tarzan with an adversary to face off against in the final act and a needed boost of suspense. So while it veers off it remains faithful to the Tarzan most fans know.

As usual, a big thumbs up for Roberto Castro's artwork, added by the coloring by Alex Guimares. With most of the story taking place at night, the colors have a nice muted appearance that also plays well with the story's emotional and physical sides. Also you can debate whose hotter-Jane or La since Castro manages to make both attractive.

With one more issue to go before the big wrap-up, it's another winner for this series, providing the thrills and excitement of the best Tarzan stories. Who can ask for more than that?