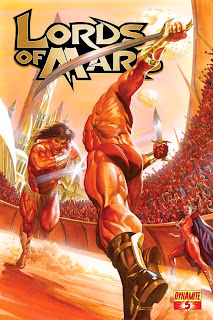 It's the big event-Carter vs. Clayton! (Red woman pictured on cover sadly not included).

Pushed into the arena to finally destroy the "tyrant" John Carter, Tarzan finds himself beginning to doubt the Therns' motives, especially when they start pelting him with fruit in order to get him angry. Carter, using his telepathy, manages to calm him down enough to realize what is going on. Demanding to see Jane, the Therns' leader Jagati Khen reveals her as his prisoner. But hell hath no fury like an Earth woman in lower gravity as Jane escapes. With his plans blowing up in his face, Khen releases white apes and all pandemonium breaks loose as the two Earthmen fight for their lives.

After all the setup we finally get the good stuff. And it was worth it. Setting up Tarzan's doubt and Carter's unwillingness to fight a hesitant enemy, Arvid Nelson and company establish a fast-paced rhythm to this issue that builds to a fever pitch. To say how it turns out would ruin the fun so I'll just say enjoy the mayhem as it builds.

Nelson gets help from Roberto Castro, whose art supplements the story incredibly well. From capturing Tarzan and John Carter's "duel" in the arena to some of the most vicious looking white apes in any of the Dynamite series, it's a visual delight with nice color and rousing drawings.

I'm holding back as this issue is just too much fun to spoil for readers. If you have missed the other Lords of Mars issues I recommend getting them-or the eventual paperback-and then read this one because it will help you enjoy it more. Sit back and have fun!