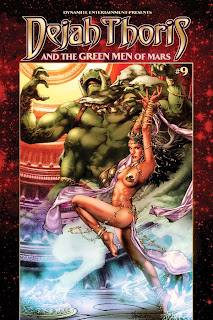 I missed the last issue so I'll be playing catch up.

Following her victory over the vicious Thark Voro, Dejah goes on a secret mission. And like most leaders-from Hannibal to Hannibal Smith-she needs to get the best of the best to assist her. So a team of Tharks are assembled and...that's all that happens in this issue.

Missing an issue does make it somewhat confusing but the only thing I take away from this issue is that it comes across as an attempt to stretch a miniseries for four more issues. The whole "Dejah forms her own A-Team or Magnificent Seven could have been a stand alone story line for the central Dejah Thoris series instead of being tacked on here. That said writer Mark Rahner does a good job setting up the Tharks who are going on this mission and how Dejah convinces them to go with her, since not much else happens here. It's a setup issue nothing more.

Like this week's Warlord of Mars issue, we get another new artist tackling Barsoom, in this case Jethro Morales and like Wagner Reis' artwork in Warlord it's split between some cool, gnarly Tharks and a mixed look for Dejah, who appears either well drawn or in a few panels overly cartoony. And since most of the issue is characters talking there isn't much chance to show off in big action sequences. Again maybe I'm being hard so maybe in the next issue we'll get to see Morales really show his skills.

As a setup story, this would have worked better in the ongoing major series but otherwise it's an intriguing setup so I'll leave it at that. If I don't get the chance later have a safe and merry Christmas everyone. Until the moons hurtle through the sky again, Kaor!