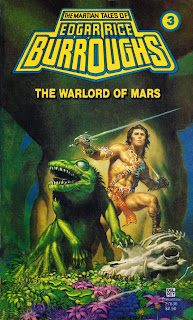 As I'm sure most of you die hard ERB fans know, the first part of The Warlord of Mars was published in the December 1913 issue of All-Story magazine, wrapping up a busy year for the author. Following the publication of The Gods of Mars and The Return of Tarzan, this brought a close to the opening Barsoom trilogy with a bang. Having just reread it for the first time in a while, I thought I would write my impressions and what stuck out this time. See what you think and leave your own thoughts and opinions about the book.

--No prologue this time. Unlike the first two books Burroughs does not open with a prologue establishing how the story was received-usually from uncle Jack. Instead this opens with John Carter in action.

--Woola returns! Showing his loyalty Woola remains a constant throughout much of the early section, especially when Carter almost goes down the wrong path in his search for Matai Shang and Thurid.

--"Hi, I'm John Carter." I had to laugh at his honest introduction to Therns Lakor and his unnamed companion. When you're the greatest swordsman of two worlds I guess lying about your identity is unnecessary.

--"Your widow will become my wife!" Clearly both Matai Shang and Salensus Oll have one track minds since both decide to marry Dejah Thoris. Is she the only hot woman on the planet?

--Insects of unusual size. The hornet-inspired Sith was a creepy addition to the creature life of Barsoom. A smaller version made its film debut in the 2009 Princess of Mars film.

--The Carrion Caves sequence. This would had made a great sequence in a film version, made by someone who respects the material not just his own ideas.

--It takes a while to become an Okarian. According to Carter it took three days to get his and Thuvan Dihn's skin yellow and their beards attached before could enter Kadabra. Usually it just takes minutes for Carter to slap on red dye to pass as a red man so I guess yellow takes longer.

--Solon. Another film-ready sequence would have been Carter's desperate fight with Solon since for once Carter has met his match.

--"It's a trap!" OK if you want more proof of how much George Lucas strip mined from Burroughs consider this: The Guardian of the North projects a magnetic "energy shield" around Kadabra that must be deactivated to save the Helium fleet and allow the attack to commence. Just substitute the shield generator on the third moon of Endor and you get the idea.

--"Heroic daughter of a heroic world!" While Carter mentions that women are not extensively trained in sword fighting he believes that Dejah would had picked one up and fought at his side. So this whole "Dejah is just a damsel in distress" defense that Andrew Stanton and his lackeys used to justify their manipulative "warrior princess" Dejah is like much of their claims-bull. Maybe if they had read the books they would had realized what happened.

--Redeeming a princess. While most of the villains in Burroughs' work are often beyond redemption Phaidor is given a redemptive moment and a shocking twist that even leaves Carter stunned.

--A final kiss. How else should this story end but with the woman he loves in his arms and a final embrace?

So what makes this book work for you? Leave your thoughts below and let me know if I missed anything.

I must say that the All-Story magazine readers were luckier than me. They had to wait only 6 months to see what happened in the Temple of the Sun. I had to wait a whole year! (Gods was published in France in 1987 and Warlord in 1988)

I agree with pretty much all you wrote. The only thing I would add is that I loved the mock trial at the end. It was an awesome and appropriate ending, with all allies of Carter reunited. What a masterpiece of a trilogy!

As for a faithful cinematic adaptation I suspect that even you would find problematic to not see Lynn Collins for huge portions of Gods and Warlord. The story is mostly based on the frustration of Carter not being able to be reunited with the love of his life.