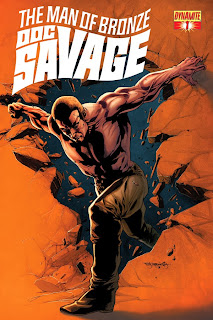 This is a few days late but it's worth it.

While giving an important speech, Clark Savage Jr. receives word of chaos in the streets. When he and some of his Fabulous Five arrive they discover an aurora in the skies of New York and people acting out violently. But before they can intervene both the aurora and the violence stops, leaving several injured and a city on edge. Doc and his team begin to investigate but with each step they discover a more massive plan and a bigger threat.

I've decided to leave most of the plot of this issue vague since I don't want to spoil it but believe me, this was fun! Having came to Doc Savage only a few years back thanks to reprints I fell in love with the action and unique characters and this one captures it well. Writer Chris Roberson manages to capture the pulpy excitement of the old novels while at the same time crafting an intriguing story that catches the reader's attention and helps carry through the entire issue. From crafting an interesting tale to providing enough space for Doc and the Five Roberson brings a knack and I can't wait to see what he does next.

Helping the story move along is also the excellent artwork by Bilquis Evely. From the first panels showing the design of the characters-which goes for realism not exaggeration-to the chaos in the streets to the rousing finale he draws with a deft hand, preventing the artwork from getting messy or over the top. Some may not like the character designs, especially if you only know Doc from the James Bama cover art of the 1960s but if you give it a chance the art is sensational.

Fans of Doc Savage and those just looking for a fun read I give this a hearty recommendation. It captures the fun and pulp thrills of long time back while making it accessible to modern day readers. What more do you want?