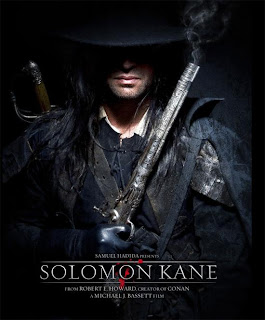 OK I finally saw it. The question is was it worth the wait? You bet your flaming demons it was!
Opening in 1600 North Africa, Solomon Kane (James Purefoy) is a blood thirsty soldier in the British army who is massacring a Spanish stronghold when he suddenly discovers a ton of riches-and a dark demon called the Devil's Reaper who has come to claim his soul. Barely escaping with his life, Kane renounces his ways and decides to become a man of peace at a monastery back in England. But when he is asked to leave Kane finds himself alone until he meets the Crowthorns, a family of Puritans who are planning to leave England for the New World. When the family is attacked by a strange masked man and his minions and the daughter, Meredith (Rachel Hurd-Wood) is carried off, Solomon decides he's ready to break his vow and willingly give his soul to the Devil to rescue Meredith. He soon discovers that she, along with several others, have been marked for death by a dark wizard named Malachi (Jason Fleyming) and it's up to Solomon to stop him and the forces of evil...a path that leads to his past and a possible redemption.
When I first heard about this movie, based on the Robert E. Howard character, I was interested. I had liked Howard's stories about the Puritan swordsman and was thought the movie looked good from the trailers that popped up. Then the movie just seemed to never show up here in the US while word seemed mixed-with some loving it, some hating it and some Howard fans annoyed with the fact that writer-director Michael J. Bassett had given the mysterious Kane a back story. So I tempered my expectations when I sat down to watch this film...and came out loving it.
From the very first scene-a violent action sequence filled with sword fighting, blood and one of the creepiest sequences I've seen in a long time-Solomon Kane had me hooked. Part of it is due to the actors. As Kane Purefoy manages to bring the character to life with a humanity while at the same time coming across as someone who has been to hell and back and is willing to go there again. He might seem a little stiff at the beginning but once he hits the road he carries the movie with strength. (It's also fun to compare this to his brief but humorous scene stealing turn as Kantos Kan in John Carter and see how versatile he is.) Purefoy also gets some good support from a varied cast, including Pete Posthelwaite (who sadly has since passed away) and Alice Krige as Meredith's parents, Mackenzie Crook (from the Pirates of the Caribbean movies) as a sinister priest, Fleyming as the devilish Malachi-even though he doesn't appear until the final scene he's a scene stealing sight; and acting legend Max Von Sydow as Kane's father.
The movie's other major plus factor is the look and feel of the film. Director Bassett doesn't go for the worn out quick cut Bourne editing that has made action movies headache inducing in recent years. He also creates some creepy set pieces that makes most horror films seem weak by comparison. One sequence where Solomon is pitted against cannibalistic humans is helped by stark lighting and the make-up. Another thing I liked about the film was the almost low-tech approach. There is CGI effects but a lot of it is done the old fashioned way with cool make-up effects and real blood-not the CGI splatter seen in recent movies like the new Conan the Barbarian. The cold desaturated look also helps set the down, capturing the mood effectively.
There is some minor things here and there that I didn't like. The finale is the standard hero fights the big monster ending while the revelation of (SPOILER ALERT!) of Malachi's masked right hand man is a little predictable. But otherwise I didn't see anything truly objectionable. Of course and to deal with this openly I know some Howard purists will balk at the plot and the decision to go this route. The recent Conan film did the same thing and as anyone knows me I've been pretty blunt in my criticisms of John Carter for the pointless back story added to that film, but in this case I felt that Bassett made it work. I guess it's just a personal thing that will depend on the viewer.
So to wrap up with praise and some ranting. The film is a winner and if you get the chance see it. The ranting: the fact that a film like this is still stuck in limbo while big budget junk gets multi-screen releases is just sad. If you don't believe that I'll say this: at least Solomon Kane isn't based on a board game. Rating: **** out of 4.
at May 18, 2012