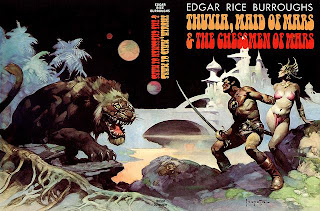 Picking up where I left off, let's take a look at the adventures of John Carter and Dejah Thoris' children as I continue revisiting Edgar Rice Burroughs' series.
My original thoughts on Thuvia, Maid of Mars was that it was a good book but not great. Stuck between the opening trilogy and the later, much stronger books Thuvia sort of has an unfair place in the series. It lacked the originality of A Princess of Mars or the action packed brilliance of The Gods of Mars. It also failed to capture the unique characters that populated The Master Mind of Mars or A Fighting Man of Mars. So when I started rereading it I was determined to give it a chance and judge it on it's own merits. Surprisingly it improved with that approach. My major issue with it has always been Carthoris and how, well bland a hero he is. Here not comparing him to his famous father he comes across as a more balanced hero, one who can handle a sword with ease but also shows some smarts, particularly with his creation of the "controlling destination compass." The book's major points still come through-an alluring heroine in the form of Thuvia and her ability to control the savage banth, the Phantom Bowmen of Lothar-which is still one of Burroughs' greatest inventions-and the fast paced action sequences. So while it may fall short of some of the other books, Thuvia is still a fun read.
Following Thuvia though is one of my favorites in the series-The Chessmen of Mars. This time it's interesting to see how my opinions of it didn't change. I still think it's a strong entry, stuffed with original characters and a pulpy feel that few writers could equal. It's also interesting in looking at it and see that Burroughs was a more talented author then some people give him credit for. While praised for creating unique worlds, he gets criticized for "flat characters." Here we see his characters grow as their adventure unfolds. Tara of Helium starts out as a spoiled princess, used to getting her way but by the novel's end she has grown into a woman who can handle herself and even falls for someone she knows she can't be with (which of course in ERB tradition she can be with since he's Gahan of Gathol in disguise). The character of Ghek also changes from the intellect filled Kaldane into something more "human" through his interaction with Tara and Gahan. He comes to care for them and is willing to help them. Of course this doesn't distract from the action scenes-from the fight and escape from Bantoom to the live spectacle of Jetan-which cries out for a big screen treatment-Burroughs keeps it all moving. And honestly I love the end where after all of her adventures the one person Tara is really happy to see is her father. How sweet is that?
So the ratings then: Thuvia, Maid of Mars ***1/2; The Chessmen of Mars **** Next time we get brain transplants, "The Death" and a Trip to the Moon of Mars.
at May 03, 2012