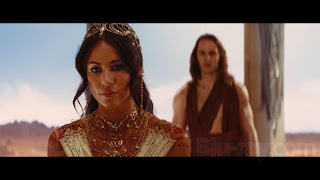 With only a little over a week until its release on June 5, I thought I would link to some reviews of the John Carter Blu-Ray/DVD. The first one I have found comes from the site DVD File http://www.dvdfile.com/reviews/blurayreviews/170341-john-carter-bd-review . The early word: On the audio visual side the disc is a winner while the reviewer was mixed on the extras noting that the much vaunted "Disney Second Screen" bonus won't be available until after the release date and that the commentary track with Andrew Stanton and the producers has a "melancholy" feel since they clearly love the film they made which makes it a stark comparison to the reception the film received. If anymore reviews pop up I'll update this post and if you find one leave a comment. UPDATE: A second review has shown up at Blu-Ray.Com http://www.blu-ray.com/movies/John-Carter-3D-Blu-ray/34573/#Review and it has a similar verdict on the disc itself. Be warned though-the reviewer might tick off some as he dismisses Edgar Rice Burroughs as the Michael Bay of his era (WTF!!!) and doesn't care much for the film itself. Some nice caps from the disc though. UPDATE 2: Two more early reviews have popped up. The first one comes from Disney Tourist Blog http://www.disneytouristblog.com/john-carter-blu-ray-dvd-review/ and he gives the film and the disc glowing endorsements. The second one comes from the Home Theater Forum http://www.hometheaterforum.com/t/321013/john-carter-3d-blu-ray-review and he gives it a split vote-great looking disc and extras but only slight praise for the movie itself (the reviewer also suggests that James Purefoy would have been a better John Carter and after seeing Solomon Kane I have to agree!) MORE UPDATE: Two more reviews have appeared online. The first (courtesy of The John Carter Files) comes from High-Def Digest http://bluray.highdefdigest.com/5573/john_carter.html and the reviewer gives the film a second chance and joins the chorus of praise on the disc's audio/video. On the flip side is this review from DVD Talk http://www.dvdtalk.com/reviews/56329/john-carter/ as the reviewer found the film itself a missed opportunity.
at May 28, 2012