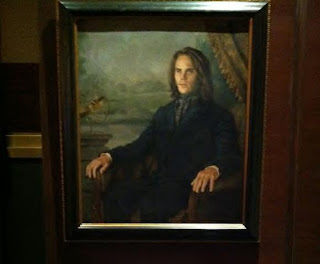 As usual I'm running late with this news. The site Showbiz Cafe has posted up some pics from another press screening of footage from John Carter, this time around showing off costumes, weapons and space ships maquettes and even a life size Thark. Unfortunately no descriptions of the footage shown were allowed (thanks to the paranoids who run Disney) so we'll just have to make do with the pics. You can see the rest at http://showbizcafe.com/en/news/disneys-john-carter-exclusive-sneak-peak-look/2554 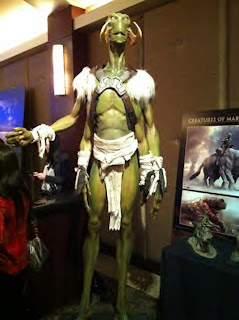 UPDATE: A few more pics, this time from the site Just Jared http://justjared.buzznet.com/2011/10/04/taylor-kitsch-lynn-collins-john-carter-preview/ showing off maquettes of a baby Thark, a Great White Ape (which resembles the one shown for the upcoming John Carter: The World of Mars comic book) and Woola who has come down with a case of the Disney Cutes. So what do you guys think? 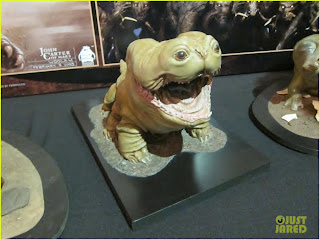 Everything is finally starting to shape up. EVERYTHING BUT WOOLA

Personally I think Woola looks just like the description in the book. Disney did a good job.

I can live with woola as long he doesn't walk and burst into song!

Looking at what Disney/Pixar did with Woola he has the cutsy look like the animated movies. Don't get me wrong he is a fearce creature in the books but is cuddly like a puppy with John Carter. I can see some funny moments in the movies. Yeah I said it love to see the 1st 3 novels done. :)

Ah, so Woola doesn't have 10 legs like in the book, and so what if this early model looks cutsy. Big deal! Besides, based on the new trailer(s) out for the film, Woola's look appears to have been updated and modified...doesn't look so "cute," after all (sorta like the "cute" look for a dog like a bull dog, in a way. Still, very good work so far. Got a good feeling about this movie!