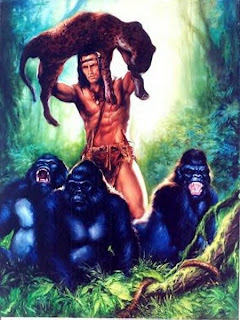 Here's some news for you ape-man fans: The site I Am Rogue has an interview up with writer/director Craig Brewer (currently doing publicity for his Footloose remake) where he talks about his plans for Warner Bros' new Tarzan film. Among the information revealed, Brewer had just turned in the script and is excited to be working on the film: "I am so excited about it because I just turned my script into the studio last Friday. I’m waiting to see what they think. My producing team loves it, and some other people at the studio have read it so I’m waiting to see. I can tell you it’s the best thing that I’ve ever written. I hope they’re going to let me do it because I really think we are going to make an incredible Tarzan. So I’m hoping to do it." He also reveals that the film "definitely doesn’t take place in a modern context. I was a big fan of the Edgar Rice Burroughs’ books and it takes place in the African Congo around the turn of the century so it’s the classic legend." You can read the rest at http://www.iamrogue.com/news/interviews/item/4962-iar-exclusive-interview-director-craig-brewer-talks-tarzan.html
at October 12, 2011