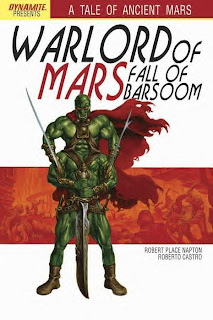 Sorry for the late review. I needed a few days off from Barsoom but now I'm ready to go.
Last seen getting a sword to the body, Orovar General Van Dun Bor survives and finds the green men declaring victory of the city Thark. After finding a thoat, he rides on, only to find an Orovar convoy under siege, this time from rogue Orovars who have been driven from their home. Driving them off, Van Dun and the soldiers prepare a trap for the oncoming green men to slow them down. Meanwhile at the Atmosphere Factory, scientist Tak Nan Lee continues his work to get the factory running, but a rising conflict between the Orovars and the captured red woman Anouk causes problems. And unknown to anyone the plant is being watched...
Following my review of John Carter-World of Mars, I decided to take some time before jumping into this issue. As is the case with most limited series, issue 3 is more setup than payoff, showing the breakdown of the Orovars, the rise of the Tharks as a separate race from the Warhoons and the struggle to get the Atmosphere Factory ready before tragedy strikes. Writer Robert Napton does a good job of balancing the plots and keeping the reader interested. He's help by artist Roberto Castro whose work captures the falling planet and its races well.
I know this review seems brief but I honestly can't say anything bad about this issue. I did enjoy World of Mars more but as far as this series goes it's still a fun and entertaining read for Barsoom fans.
at October 17, 2011