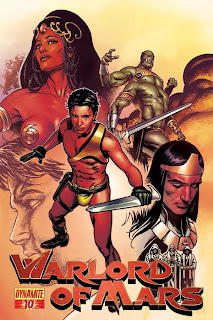 Sorry for the lack of updates in the last week. So I'll try to make up for it with some reviews in the next few days. First up, "The Heretic of Mars!"
As this issue opens, it's been some time since John Carter's mysterious disappearance when Dejah is attacked by an assassin at night. But she's rescue by both her son Carthoris and Tars Tarkas. Also arriving on the scene is the new Jeddak of Zodanga, Zat Arras, who Carthoris has already grown to dislike. But things take a turn when an amulet worn by the late keeper of the Atmosphere Factory is found among John Carter's possessions. An emergency meeting of the Jeddaks leads to suspicions that John was responsible for the caretaker's death. When a representative of the Holy Therns offers Dejah and Carthoris the sanctuary of the Temple of Issus until the killer is found, Carthoris plans his own investigation at the Factory. But before he leaves Tars Tarkas agrees to go with him, leaving Dejah and Sola at the Temple and possibly in more danger than before...
Planned as a three issue arc that to bridge the gap between A Princess of Mars and The Gods of Mars, this issue opens well with the attempt on Dejah's life, the introduction of both Carthoris-who has reached at least adolescence in Barsoomian fashion-and Zat Arras, as well as bring in the Therns into the storyline. Again writer Arvid Nelson shows he has done his homework by setting up plot threads from Burroughs-Zat Arras attempts to gain Dejah's favor for example-even though a brief mention that Matai Shang has "taken an interest in the Helium Princess" doesn't seem to fit the character's latter threat to hand her over to his generals or the First Born Thurid in The Warlord of Mars. Then again that plot could be more revealed in the next two issues. I'm sure there will be the die hard fans who will balk at the setup and the attempts to fill in the gaps and others might enjoy it.
As for the artwork, this issue sees the return of Stephen Sandowski to the interior art (and the cover art shown above) and he does a pretty good job of keeping the earlier designs but tweaking them. He's given Dejah a nice makeover, still retaining her beauty and manages to tone down the "Hulk" Tharks. Admittedly outside of the opening scene, there isn't much action so mostly Sandowski is drawing people standing around and there is some offbeat choices-the Temple of Issus looks like a Mayan temple for example-but he's still a good choice for this run.
So to wrap up this review, I guess we'll have to wait and see how it ties together. As I said some might enjoy this "what if" approach to the time between John Carter's departure and return and others might not. If you want a brief preview go here and you can see http://www.comicbookresources.com/?page=preview&id=9899.
at October 01, 2011