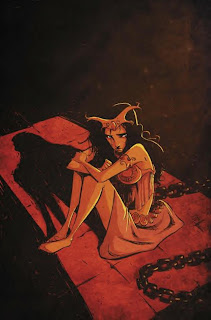 Sorry for the lack of updates in the last few days. But I'm back and with a look at the second issue of Marvel's take on Edgar Rice Burroughs. Unfortunately those looking for an improvement won't find it here.
After a brief recap of the first issue where John Carter overuses the word "amazing", we jump in as he meets the Princess Dejah Thoris-who promptly spits on him (yep that's a way to make her updated). Afterwards the story follows the novel with her "trial" in front of Lourquas Ptomel and John earning his chief status. We also meet Sarkoja whose hatred for both John and Dejah leads to a duel between John and the Thark Zad that...Look you read the novel you know how it goes.
Sorry for the snark but I was guess after the lackluster first issue I was hoping that maybe it was a fluke and this one would be a vast improvement. Sadly no such luck. First Roger Landridge's writing makes it clear the book is really being aimed at younger readers who apparently will relate to a braggart boasting of being "amazing" and being a "fearless hero and all." While John Carter would become boastful later on (after all he was the greatest swordsman of two worlds), here it just gives the reader-especially the first time reader-an unlikable character to root for. Also a spitting Dejah Thoris? Turning her into a blitzing warrior maybe pushing things, but her dignity went out the window with her saliva. As for Filipe Andrade's artwork? Sorry folks still not sold on it. When you can't turn out a drawing of the most beautiful woman of two worlds you know you're in trouble.
So in closing I have pretty much the same reaction as I did for the first issue-it's an empty money grab meant to appeal to undiscriminating youngsters. My suggestion if you want to introduce the world of John Carter and Dejah Thoris to young readers just give them a copy of Edgar Rice Burroughs' A Princess of Mars. If anything it's better written and whatever cover art is on it is bound to be better than this.
at October 24, 2011

That picture is supposed to be of the princess?

Yes, forlorn skinny waif is not exactly as she is usually pictured.

I agree. A friend gave me the first issue, and I politely said, please don't buy anymore of this series.