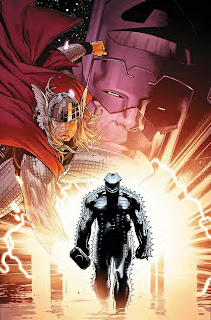 As usual no snappy opening.
When we last left off, the war between the Asgardians and Galactus has reached a stand still when both the big G and Odin fell to Earth, the latter slipping into the Odinsleep. As this issue opens the citizens of Broxton and the small Asgardian army led by Volstagg confront Galactus who refuses to show mercy. With Thor and the Silver Surfer racing towards Earth, Mjolnir is pulled from Thor's hands and into the hands of the Destroyer who is about to face off against Galactus when he retreats...Or so it seems. Actually the Worldheart Seed that both sides have been fighting over has been stolen by Loki, who has hid it inside the broken World Tree in order to stop the fighting. With both sides at a stand still, Odin agrees to peace but the final resolution rests with a simple human.
Having enjoyed the previous issues in this series, writer Mark Fraction ends "The Galactus Seed" storyline not with a big Marvel bang but rather in a more subtle and touching way. Focusing on the character of Pastor Mike and his own fears about protecting his flock, it adds a human touch to the cosmic action and shows what one man can do to save the world. Fraction also adds a touch to Loki and Thor's relationship and how even one noble act does not erase the past. My only disappointment was the lack of action for the Destroyer-I'm sure others would have enjoyed seeing a smack down between the Destroyer and Galactus.
Also making the issue a visual treat is the artwork by Olivier Coipel whose work has been tops in this series (it makes me wish he was doing the art for A Princess of Mars) as he captures the epic and the intimate details of the story. If you're looking for a good looking comic book this one tops my list.
I just hope the next storyline has been as entertaining as this one has. A final rating of "The Galactus Seed:" ***1/2 out of 4.
at October 03, 2011