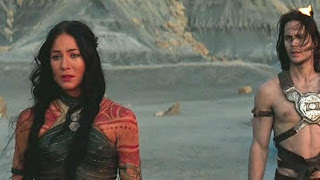 If you want a sequel. That's according to an article on Slash Film http://www.slashfilm.com/john-carter-700-million-earn-sequel/ that quotes a profile of Andrew Stanton that the New Yorker has done. The article admits there are some stumbling blocks in the way-an unproven leading man in Taylor Kitsch, a bland title that tells the audience nothing, a lack of audience buzz despite the film being 5 months away from release and mixed reactions to both the trailer and the footage shown at the D23 Expo. The article does point out though that Avatar faced similar issues and still conquered the box office, not to mention Stanton's Pixar history and the possibility of a big marketing push over the holidays so we'll see. So do you think John Carter can make that much at the box office? UPDATE: More info has come out from the New Yorker piece, this time from the site The Playlist http://blogs.indiewire.com/theplaylist/archives/john_carter_had_a_lengthy_18_day_reshoot_to_improve_correct_story_issues/, which reveals that the film underwent "a lengthy" 18 days of reshoots after the Pixar team watched and critiqued a three hour rough cut of the film. Among the problems was "a rather drab opening sequence in which the details of the Barsoomian wars on Mars are explained" which Stanton reworked down into an opening "battle between Zodangans and Therns" (OK anyone got an explanation for where that came from?). Also the article reveals that the film did receive a positive response at a test screening in July but voices concerns that the film might end up like this past summer's Cowboys and Aliens as another high concept box office disappointment.
at October 11, 2011