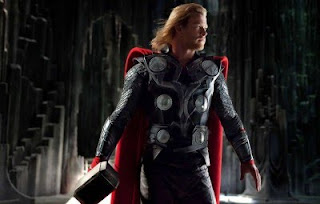 It's Hammer Time! (I know, lame pun but...) And yes there will be spoilers so considered yourself warned.

Astrophysicist Jane Foster (Natalie Portman) is studying strange electrical phenemona above the skies in New Mexico with her friends Eric (Stellan Skaarsgard) and Darcy (Kat Dennings) when they see what appears to be a tornado touch down. They find a strange pattern imprinted on the ground and a guy they accidentally hit. And then the movie really starts as we go to the realm of Asgard and it's ruler Odin (Anthony Hopkins) who relates the story of the war between himself and his people and the Frost Giants who live in the realm of Joutenheim. As the years pass he decides to leave his throne to his oldest son Thor (Chris Hemsworth), a hot head whose coronation is disrupted when some Frost Giants break in and attempt to steal a device that can restore their power. Thor, mightily ticked off, decides to head to Joutenheim with his brother Loki (Tom Hiddleston), the female warrior Sif (Jaimie Alexander) and three friends referred to as the Warriors Three, for answers. Unfortunately he starts off a war with the Giants and Odin decides to teach Thor a lesson-he strips him of his powers and his hammer Mjolnir and banishes him to the realm known as Midgard-or as we call it Earth. While there he is befriended by Jane and has to learn humility and compassion, especially when he discovers that Loki is behind everything, setting up a battle that will rock the Nine Realms...

I have to admit when I first heard that Thor was to become Marvel's next big budget movie I was more than a little skeptical. The character can be at best aloof or even arrogant while the mythology of Asgard can be confusing. Also I wasn't sold on the idea of Kenneth Branagh directing. After all his best known work was with Shakespeare and didn't exactly fit the bill to be helming a comic book blockbuster.

Well to my surprise Thor delivers, big time. First the really good stuff-Hemsworth is perfect as Thor. He captures the arrogance and brashness of the God of Thunder with a remarkable ease and holds his own opposite veteran actors like Hopkins and Skaarsgard. He also comes through in the action scenes and even in the humorous moments. If this doesn't make him a household name I will be surprised. The rest of the cast also delivers, especially Hopkins and Skaarsgard. Portman does get upstaged a bit by Kat Dennings' Darcy but when alone with Hemsworth has the needed chemistry. And the Warriors Three and Alexander's Sif also get enough to do without becoming superfluous to the plot and get their moment to shine when battling the Destroyer to save the small town Thor is staying in.

Branagh also gives the film a grandeur, capturing the world of Asgard with an eye for spectacle. The costumes, sets and stunts are all top notch and Patrick Doyle's music score manages to capture the epic and intimate unlike most comic book movie scores. The director does get carried away with too many "dutch angle" shots but it comes closer to capturing the look of a comic book more than most and certainly much better than Ang Lee did with Hulk.

Of course there are problems. The first is how lacking a villain Loki ultimately is. I'm not saying Hiddleston gives a bad performance-in fact he is rather good. But the role is thinly written and his reason for his actions is lacking. Let's just say brotherly jealousy isn't that compelling a reason for causing massive mayhem as it used to be. The second is Marvel shoving in SHIELD just to setup next year's The Avengers movie. I know comic book fans love this but to me, like it was in Iron Man 2, it's a distraction, especially one scene during Thor's attempt to retrieve Mjolnir that is just there to introduce a character we won't see again until next year. All that could have been left out and the film would have been stronger but I guess I'm in the minority on that point. And finally some of the CGI is a little dodgy, like some shots of Asgard and the Bifrost so those demanding 100 percent perfect effects might want to look elsewhere.

Even with those points Thor still kicks off the summer with a fun, entertaining movie that takes a hard character and has a good time with him. I'm sure someone will disagree and I might even have second thoughts later but for now the rating is ***1/2 out 4.
at May 07, 2011