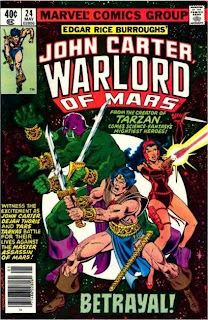 OK back to Barsoom for more adventures.
When we last left off, both John Carter and Dejah Thoris were being held in the undiscovered city of Karanthor by Wing Men, descendants of the ancient Orovars. Issue 21, "The Lady and the Lion!" opens with John having just punched out the devious leader Chan Tomar but being discovered by Tomar's guards. John and Dejah attempt to escape but are recaptured. While in the dungeon Dejah admits her shame for betraying John for the repulsive Chan-Rule No 1 ladies-it's OK to become another man's sex slave as long as you're doing it to protect the real man you love-before the big event-a fight with a wild banth in a coliseum with Dejah as bait for the creature. John wins but not before Tomar decides to shoot an arrow into Dejah's shoulder. And that was his last mistake as Dejah Thoris gets her own vengeance and rids the Wing Men of their leader. And what do they give in return? Death to John and Dejah! What a bunch of ingrates!
As issue 22, "Climb the Freedom," opens John and Dejah are sentenced for violating "ancient laws" for slaying Chan Tomar and are to be returned to the arena. But John breaks free and grabs his radium pistol, a weapon the Wing Men have no familiarity with and manages to use it to free both him and Dejah. As the two make a mad dash for it, the Wing Men are in hot pursuit until John uses his jumping ability (yep white men can jump) and the Wing Men decide to let the two die out in the wilderness (not only ingrates but lazy as well). After that it's one long climb-both for our heroes and the reader-as the two scale the "wall around the world." Along the way they fight off a white ape, tend to Dejah's wounds, hear tales of John's trip to Mount Everest and his time before the Civil War and make up like Martians do. Eventually they get out, find Dejah's flier that they had abandoned and are doing some fencing practice when an airship appears. Unfortunately it happens to be the airship of that Guild of Assassins! (You remember them right?)
Well John and Dejah does as issue 23, "The Man Who Makes Murder!" (sounds like an Alfred Hitchcock Presents episode title), finds them captured by the Guild. But luckily for Dejah they think she is Daria, the female assassin who had been killed after poisoning John back in issue 16. After slugging a few assassins, John and Dejah stage a mock fight so John can read Dejah's mind and get some answers. He discovers that Dejah discovered a plot to overthrow the royal family of Helium and that her real mission was to discover the identities of the assassins. John also discovers a shocking secret that causes him to falter and be captured. Meanwhile back in Helium Tardors Mors is beginning to worry about the missing John, Dejah and Tars Tarkas (who rode off in issue 18). Back on the ship Dejah gets more info on the Guild and a new outfit by way of Barbarella. But since Daria failed to kill John Carter, Dejah must defend herself in a contest against female assassins. Also her cover is blown by the arrival of Guild's leader Tal Mordin, the Master Assassin of Mars! And her fate-a four armed one!
Lucky for her, that four-armed warrior is Tars Tarkas and as issue 24, "Betrayal!" opens he lightly taps Dejah-well lightly for a Thark-and helps John escape causing all hell to break loose. A massive fire helps cover up Dejah's escape in a flier while John and Tars stay on board and begin to take out the assassins one by one. While that's going on Dejah returns to Helium but since she's wearing the outfit of Daria is mistaken for an assassin and arrested. She also finds the mole inside Helium-Sorbus, a Dwar who has the complete trust of several, including Kantos Kan. Sorbus leaves Dejah in a cell in an abandoned catacomb and to some ulsios (Martian rats). Can she escape? Well John and Tars defeat the Guild? Or-as the last page asks-"Is this THE END?"
With 8 issues left I decided to split them into four for this review and the next one. As this storyline shows, we go from one thing to another in rather quick succession. In fact maybe too quick as I was wondering why the whole Karanthor plot was even included. It could have been a whole story itself instead of interrupting the flow of the "Master Assassin of Mars" story. Also the story is wrapped up rather abruptly. John's friend Garathon just leaves, leaving John and Dejah to their fate, the Wing Men get lazy and just leave the pair to die on their own while the whole Dejah as slave subplot just leaves a bad taste in this fan's mouth.
Once we move past that though issues 23 and 24 move quickly with a tense narrative by writer Chris Claremont and excellent art by artists Mike Volburg and Ric Villamonte (the two took over from artist Ernie Colon with issue 22). The added political intrigue and the plan John uses to take down the assassins on the ship add some variety to the swashbuckling while the ending does leave for one enticing cliffhanger. And that cliffhanger? On the letters page of issue 24, Marvel explains that this was to be the "last issue...at least for the foreseeable future...Unfortunately the intricacies of magazine publishing-complicated in no small way by the fact that Marvel licenses CARTER from the Burroughs estate-prevents us from doing so at this time." This does seem to go along with various reasons I've heard as to why the series was ultimately cancelled-the Burroughs estate demanding more money for the rights and possibly being unhappy with the direction the series took. But I guess they must have given Marvel a reprieve since four more issues were published...and we'll tackle them soon.
at May 03, 2011