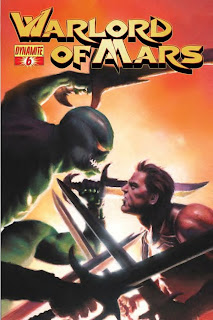 Well here's the second comic book review of the weekend.

This issue opens with one of the best chapters from A Princess of Mars-Sola's story as she relates the history of her parents and their betrayal by Sarkoja. After listening to this tale John Carter and company arrive in Thark where he quickly decides it's time to leave-especially after he hears he's to be thrown into the combat in the arena. His plans take a turn when Dejah Thoris is taken before the Jeddak of the Tharks Tal Hajus-and if you read the book you know the rest: John cleans Hajus' clock, our heroes escape and are pursued by Green Men before being separated. At the end John stops the pursuerers-who are Warhoons-and finds a structure that might hold the key to his-and Barsoom's-salvation.

After the swords through skulls action of the Dejah Thoris series, I found this return to calm a welcome change. First the good stuff-the handling of Sola's story was done well and I loved the flashbacks showing us Sola as a child and her mother. I also liked the appearances of the Warhoons who sport better looking tusks than the Tharks have so far. The scene where John reveals his feelings to Dejah before the escape is also well handled and the action where they separate to escape the Warhoons adds some needed action after the talking.

On the flip side, well I didn't care much for Tal Hajus' look. Let's just say they took this http://www.imdb.com/media/rm3657794304/ch0000111 and added four arms and legs. And as you die-hard fans can tell from my description this is the first issue since #2 to change the original storyline-yep no Warhoon games and no Kantos Kan before John's discovery of the Atmosphere Factory. Maybe that's being saved for the next issue or has been changed for other reasons. We'll have to wait and see.

Again sounding like a stuck record, issue 6 is another strong issue for the series. Hopefully next month I won't have to review everything so close together.
at May 01, 2011