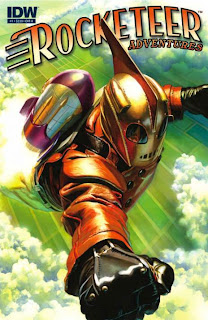 As usual I can't think of a witty opening so let's take a look at the return of another pulp inspired hero to the comic racks.

Divided into three shorts stories, the first one by artist-writer John Cassaday, simply titled "The Rocketeer," finds the Rocketeer aka Cliff Secord in a stand off with the gangster Maroni and his henchmen over a stolen rocket. Complicating things is that Maroni has Cliff's girlfriend Betty as a hostage. Cliff acts fast and well gets a reward he wasn't counting on. The second story "Home Again," by Madman creator Mike Allred, finds Cliff and Betty having a brief reunion when Cliff returns from New York with a newer rocket from a mysterious stranger named Jonas. In exchange Cliff has go undercover to stop the "dark forces" that are now threatening the world. In the final story "Dear Betty..." written by Kurt Busiek with art by Michael Kaluta we find Betty on her own with Cliff off to war. The letters he sends helps her through the hard times but when the stop coming she begins to fear the worst.

Some confession time folks: My first exposure to The Rocketeer was the 1991 Disney film (probably the last really great live action film they made) and then I discovered Dave Stevens' original comics. Tapping into the same formula as Raiders of the Lost Ark, I loved the comics and the film's fun and light hearted tone and the homage to classic matinee fare like King of the Rocket Men. So when I saw this on the shelf I immediately snapped it up. And it was worth the price. The three stories are different enough but inter connect to tell a long form story with some surprises thrown in. I probably liked the last one best. For anyone who has had to deal with separation from loved ones due to war Busiek touches on the subject with warmth and compassion, helped by Kaluta's art. Following that the first one is a fun, good guys vs bad guys story with humor while the second one is OK. I felt it did suffer from being the middle story and being constrained by the shortness of the story-it felt like there was more to it that was missing. But that's a minor complaint.

The artwork is also top notch, capturing the look of the world Stevens created while offering enough wiggle room for each artist to work in. I also have to mention the cool Alex Ross cover (shown above) and two good pin-ups, one by Mike Mignola (image the Rocketeer meets Hellboy) and Jim Silke and you have a good start to what I hope is a successful series. And with issue promising such talents like Darwyn Cooke and Mark Waid it might be.

So breaking the usual lack of ratings for individual comics I'm giving this one the full **** out of 4. Fans of both the comics and those only familiar with the movie will I think enjoy this.
at May 30, 2011