John Carter of Mars Trailer: When Can We See It? 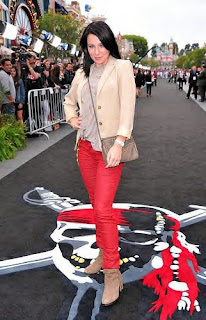 That seems to be a question that needs answering. For weeks, ever since Taylor Kitsch made his comment about having seen it, the major question has been when will we-the rest of the non-Disney world-see the trailer for John Carter of Mars? It failed to turn up with Thor and now we turn to the next logical suspect: this weekend's Pirates of the Caribbean: On Stranger Tides. Now there has been no official word from the Mouse House that the trailer is attached but it would make some sense since On Stranger Tides is the studio's only real big adventure film this summer (even though thanks to owning Marvel Disney does have stakes in both Thor and Captain America: The First Avenger). On the other hand Disney hasn't shown much sense in their handling of this film's promotion yet with no teaser poster or photos released so the only Carter/Sparrow connection possibly could be that photo above of Lynn Collins-in her red panted glory-at the premiere of Pirates 4 but you never know. I guess just keep checking the film's Facebook page http://www.facebook.com/JohnCarterMovie for any word. UPDATE MAY 21: It looks like the trailer failed to show up this weekend. Then again I guess Disney could always use the "we thought the world was ending" excuse for the no-show.
at May 16, 2011