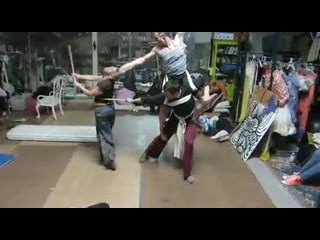 Another post for the day. This time a friend emailed me a video link on Youtube http://www.youtube.com/watch?v=Ff_FuWLbUqw with the title "Paradox Pollack - Alien / Creature Choreographer." The video's description is that it was a bid for an upcoming sci-fi flick involving "12 foot 4 armed green bug aliens from Mars." I don't know if Mr. Pollack-whose other credits based on info from IMDB includes playing an "infected" creature in I Am Legend, stunt double for actor Colm Feore on the upcoming Thor and creature choreographer for JJ Abrams' Star Trek-was hired for John Carter of Mars or not but the video shows him and others working out the ways a Thark could move and fight. Hope you guys enjoy the video.
at December 09, 2010