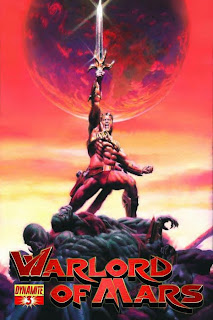 First up Happy Holidays and I hope it's a good and safe one for you and your loved ones. Now let's hit Barsoom!
And that's where this third issue begins, with John Carter landing on the planet (sans clothing so again readers use caution!), discovering his new found abilities and...well if you read A Princess of Mars you know the rest as this issue follows the the novel closely-the incubator, meeting Tars Tarkas, sakking, Sola and the introduction of every one's favorite Calot (which art-wise looks to have been inspired by this piece of art done for the Paramount movie version http://www.erbzine.com/mag23/wool02.jpg ) .
Again like the last issue, this one shows signs of improving. Of course now with John Carter on Barsoom the story will seem overly familiar to readers of the novels and that might seem a little boring since we know where the story is going but maybe that's for the best. If anything we'll be spared shape shifting Therns. There are some nice touches I did like in this issue-the Tharks' dialogue is presented in alien symbols, which makes the read feel as alien as John Carter and the design of Korad the abandoned city that John Carter is taken to. Also cool is some drawings of the inner bone structure of a Thark included in a text piece "written" by John that explains the effects of Mars on his physiology as well as how it affects the Tharks.
So we finally get the good stuff. And the next issue finally promises the arrival of the most beautiful woman of two worlds (just in time for her own series to start). About time!
at December 23, 2010