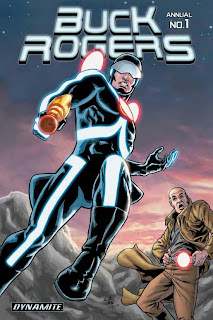 I guess I'm still on the grid following my lack of love for TRON. But here's some comic book news to make up for it.
First up Dynamite Comics will be publishing Buck Rogers Annual 1 this coming February http://www.dynamiteentertainment.com/htmlfiles/viewProduct.html?PRO=C725130159823 I had read some of their short-lived Buck series and it was just getting good when they cancelled it so maybe this will restart it.
Fans of Barsoom might also need to make a trip to the comic book store this week. Several sites, like this one http://dailypop.wordpress.com/2010/12/28/new-releases-122910/ are reporting that Dark Horse Comics' John Carter of Mars: Weird Worlds collection-which has the DC Comics version of the character-will be released tomorrow, December 29. Previously it was announced for a January 12 release and the listing on Dark Horse's website still has it, so I'll try to check or if someone knows for sure can you let me know.
at December 28, 2010