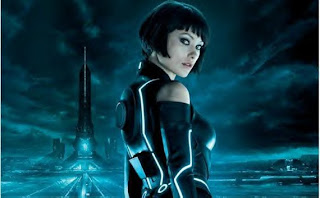 I hope you faithful readers had a good and safe Christmas. And I know this review is coming late but I only just got to see it during the holiday break. Be warned though, you'll be singing "you're a mean one, Mr. Grinch" by the time I get through with this...
Our story opens in 1989 when we meet once again computer genius Kevin Flynn (Young CGI Jeff Bridges) telling his son Sam the story of the Grid and the adventures of Tron and Flynn's alter ego Clu (which is probably a good thing since Disney yanked the original off the market reportedly for fear of ruining this one's box office chances and we need the refresher). Dad departs to go to work and then disappears, causing much confusion for his company Encom and leaving Sam the standard Disney Orphan. We then move ahead 20 years where Encom is now being run by corporate sharks and Sam (Garrett Hedlund) is a young dude with a cool motorcycle, computer skills up the wazoo and a bohemian lifestyle (which is probably the least realistic plotting in the movie). After pulling a mass prank in which he releases an upcoming software package for free, Sam gets a visit from his father's old friend Alan Bradley (Bruce Boxleitner) who has news of his own-a page from Kevin Flynn's office at the shut down arcade Flynn owned. And even though he says he doesn't care Sam goes there to investigate, finds dad's office and before he know is zapped in the Grid-a computer universe created by Flynn to help the world. But things didn't work out and before you know it Sam is captured, forced into gladiatorial combat with flying Frisbees of death and meets the Grid's new ruler-Clu! After a game of lightcycle smash-up Sam is rescued by Quorra (Olivia Wilde) a program who is living off grid (so to speak) with the real Flynn (Non-CGI Jeff Bridges). Sam then has to find a way to get his father home and stop Clu's master plan. And do it while wearing hip hugging leather pants, survive an encounter with a David Bowie clone (Michael Sheen) and not get creeped out by the CGI version of the Dude.
OK confession times folks-I never cared much for the first TRON. My memories of it was it looked nice but was boring and poorly scripted and directed. Well on that level TRON Legacy sort of lives up to the original in that is also poorly scripted and directed. In this case director Joseph Kosinski (a former commercial director, continuing Disney's track record of bad director choices for their films) seems more interested in the light show going on and less on the characters or devising a gripping story to keep the audience interested. Then again the story might have been more interesting if it wasn't cribbed from other movies-in fact the film could have been called TRON: Star Wars since it includes elements from that franchise-our orphaned hero searching for his missing father; the lightcycle tournament (which was the coolest element of the original) sequence is pretty much the pod race from The Phantom Menace; old Flynn is Obi-Dude Kenobi, spouting mumbo jumbo and surfer lingo; a fight in a bar; a character loses an arm, etc. Flynn even has a final confrontation with Clu where he admits he failed, a la Obi-Wan in Revenge of the Sith. Also not helping is the acting-or rather what the actors do. As Sam Hedlund is bland in the part, substituting groan worthy one-liners and a non changing facial expression for acting. And what planet did Sheen beam down from? His performance belongs in a Monty Python sketch more than this. Of course the biggest thing has been CGI Jeff Bridges-honestly it looked OK-but the problem is Clu just isn't memorable. Older Bridges meanwhile seems to be channeling the Dude because the writers couldn't come up with anything else. It's a shame as Bridges is a great actor stuck with nothing to work with. As for the much vaunted 3D, honestly I couldn't tell it made much of a difference. Maybe it was the overly dark Blade Runner look but nothing seemed to pop off the screen. You would think with Frisbees of death and lightcycles that would be cool 3D effects but nothing (makes you wonder if this wasn't retrofitted).
So does anything work? Well as I said before it looks visually spectacular. Disney did spend the money to make it look big and bold and the film can't be faulted for that. The return of Boxleitner from the first film is also nice. And the score by Daft Punk really rocks. But I say probably the best thing in the film is Olivia Wilde-and not just because of her form fitting outfit. As Quorra, an artificial being who has spent her entire life inside a computer, her questioning about what is to be human adds what little human emotion there is. She also handles the action scenes well-much better than Hedlund-and by the end makes you care about her. Maybe if the film was about her quest instead of our dull hero it might have made it better.
In the end, TRON Legacy is full of sound and fury but with nothing underneath. It's a light show and a desperate attempt to grow a blockbuster out of a marginal idea. If you're a fan of the original you might find it more enthralling than I did. If not well I warned you. Rating: ** out of 4.
at December 27, 2010