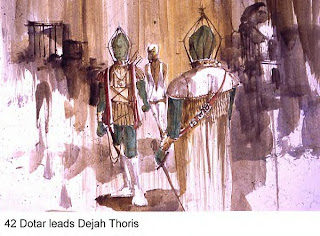 At this point my next post will be a long diatribe about the United States Postal Service and/or the Asylum's shipping department. But for the news...
First up James Cameron gets the last laugh...again. The Hollywood Reporter has confirmed Avatar has now passed both The Lord of the Rings: The Return of the King and Pirates of the Caribbean: Dead Man's Chest as the second biggest moneymaker of all time, just behind Titanic. So he really is the king of the world after all.
Next up and I don't know how this got lost (except for the holidays) but production has begun on the new Buck Rogers web series (a trailer was posted last month). Among the cast of the series will be 70s Buck stars Gil Gerard and Erin Gray. The series according to the official site will premiere possibly by September. For more-http://www.buckrogersbegins.com/
Finally in the cool department. While Disney went overboard last fall to prevent artwork for the new John Carter of Mars film from leaking out, the fan site http://www.johncartermovie.com/ has linked to artwork done for the never made 1970s Amicus version. Among the work is locations, characters and action scenes and some bizarre changes-including a white haired Dejah Thoris and two arm Tharks (makes me wonder if Asylum didn't see these and use them for their movie.) You can see more at http://www.design-concepts.co.uk/Mars/johncarterplaces.htm
at January 07, 2010