Movie Review: An Adventure in Space and Time 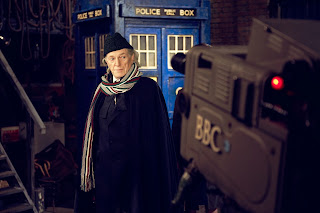 Let's just see what we got, OK?

It's 1963 and BBC Head of Drama Sydney Newman (Brian Cox) decides he wants a science fiction serial for the channel, only without robots and BEMs. He hands the project-Doctor Who-to an unlikely trio: Verity Lambert (Jessica Raine), a fresh producer facing the "old boys" club; Waris Hussein (Sacha Dhawan), the director who has to deal with the technical limitations of television; and William Hartnell (David Bradley), an actor whose career has seemingly stalled. When the group comes together they manage to produce a show that not only brings in the ratings but captures the public imagination. But they also face the future and the pain that came come with change.

Written by frequent Who writer Mark Gatiss, An Adventure in Space and Time is a love letter to Doctor Who and those who created it. Filled with moments that will tickle Whovians-from the creation of the TARDIS and the introduction of the Daleks-this telefilm manages to capture the moment when a group of "misfits" created a classic that ironically was about misfits. Helped by nice production design and a playful but serious tone, the film shows the problems in creating television in the early 1960s and the impact Doctor Who had without sinking too far into sentiment.

What makes the film worth watching is Bradley's performance. Starting out as a cranky old man who eventually warms before having to face his age and growing difficulties in playing the Doctor, Bradley brings life and spark to Hartnell without turning him into a parody or caricature. He's equally matched by the supporting cast, especially Raine as Verity, a feisty woman who has to deal with snickering department heads and her own ambitions to make Doctor Who memorable.

I'm sure some will find the film lacking in real dramatic "dirt" but it doesn't flinch away from the history of the people who made it or the changes that happened. It reminded me in tone of Tim Burton's Ed Wood, a celebration that still had an edge and touching heart. Even the final scene with its "surprise" cameo works.

So even if The Day of the Doctor doesn't live up to its hype, we already have a great tribute to the legacy of Doctor Who. So try to catch this movie when it reruns. It's worth the time for fans and newcomers. Rating: **** out of 4.