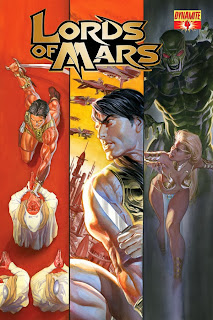 With his fleet landing outside the Fortress-Temples of the Holy Therns, John Carter and Kantos Kan find no welcoming committee but a defiant Jagati Khen and his new weapon-a mass repulsor based on the Eighth Ray that powers the airships of Barsoom. After making short work of the fleet Carter and Kantos are captured and set for the arena. Meanwhile Jane discovers the treachery at work and attempts to warn Tarzan but is captured before she can, leaving Tarzan to come face to face with the Warlord of Mars in a game to the death.

So after all the setup we finally get to the big duel--and have to wait another issue. Now I don't mind setup but you know maybe it's time to get the action moving. Even the promised air battle is cut short when Khen reveals his super weapon, leaving Carter without much to do except surrender without a fight (after talking about how he loves the thrill of combat) and Kantos to invoke the "tits of Issus." Did he ever see Issus because that's the one body part I wouldn't want to invoke (Dejah on the other hand...)

Even the usual reliable artwork by Roberto Castro is limited to mostly people standing around talking or explaining things or creeping around with little action and somewhat dull and indistinct backgrounds. I just hope he gets to show what he's capable of in the next issue when he finally gets to the big fight between Carter and Tarzan.

I've enjoyed the first three issue but this one feels just to anti-climactic and suffers too much from not enough action or tension that should be there. Let's hope the next issue delivers what fans of ERB and Dynamite expect. Also is anyone else disappointed that we haven't seen Jane in that dress shown on his issue's Alex Ross cover? Until next time faithful readers.