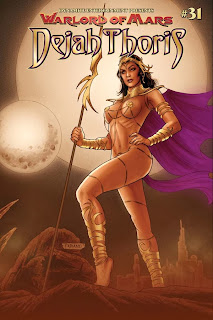 It's Dejah Thoris: Days of Future Past!

While visiting the dead city of Dorvas, Dejah gets a demonstration of a new discovery-a "time portal" that as you can guess open time and bring up any period in Barsoom's history. But when a Zodangan spy attacks, Dejah finds herself hurled into the future where Barsoom is in turmoil as rebel forces are fighting off invading armies...from Jasoom. Before too long she's captured by the Jasoomians who think they can alter history and prevent the current rebellion but their plans go astray when both rebels and a rescue party from the past arrive to save Dejah. Eventually Dejah comes face to face with the rebels' leader-a young woman who holds the key to red and green men of Barsoom's survival...a young woman named Dejah Carter.

In other words where's a flux capacitor when you need one?

After the wrap up of the Metal Men story arc I was ready to embrace anything, And much to my surprise I loved this issue. I've always been a sucker for time travel stories and the idea of sending Dejah into the future with no idea of what was to come later in her life is an intriguing idea that writer Robert Place Napton has fun with. Also we finally get back to that cliffhanger that was left at the end of the Warriors of Mars miniseries as the battle between the Jasoomians and the rebels is still raging. There is no appearance of Gulliver Jones here (maybe the next issue or he hasn't shown up yet in the timeline) but seeing Dejah Carter in charge and leading the troops brings a good plot twist, especially when she runs into her ancestor and brings up an interesting dilemma that I hope gets explored more-what would happen if she told Dejah Thoris her future?

In addition this issue brings back Carlos Rafael and again the artwork is great, with nicely defined characters and a skillful handling of the action pieces. He also brings a vibrant style to this issue, helped by the coloring and design work. Even though I'm sure some will wonder why Dejah Carter seems to be wearing more than her great-great-great-great grandmother. Yikes!

So after some less than stellar stories this issue brings us a winner and a cool story to boot. It's a fun piece that handles the setup and action well and gives us a good adventure in the pulp tradition. Just sit back and have fun.
at November 04, 2013