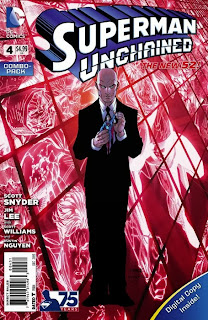 More superhero action. That's all I got.

While he details his plans on how to destroy Superman, Jimmy Olsen finds himself the prisoner of a deranged Lex Luthor. Meanwhile Supes and the creature Wraith fight to save Tokyo from an army of drones created for one specific purpose-to kill Superman. As the two fight to save the city, Lois Lane finds herself fighting for her life against the minions of the villainous Ascension, receiving a mysterious shard that might hold the answer to everything, if she survives and can get back to civilization.

So far I've enjoyed this take on the Superman mythos, a fun piece of work that combines the action and conspiracy thriller aspects that mark the best in any field-movies, books and comics. Writer Scott Snyder also deftly handles the three parallel stories that unfold, balancing all three with skill. It also captures what makes Superman the character he is, especially in a scene where, despite prodding from Wraith to just use the empty buildings to destroy the drones, Supes decides not to since there are still people around and they could get hurt. Some may feel that is corny but as shown in the massive slug fests in Man of Steel where so little concern was shown towards the citizens of Metropolis, this provides a needed counterpoint and makes it more than just mindless destruction.

A big thumbs up also to Jim Lee and his art. This might be one of the best Superman comics I've seen since the John Bryne era, making Superman and everyone look real, not an overly bulky Supes or over sexy Lois. He also handles the big fight scenes and the looks of terror on Jimmy's face with equal skill. All in all a winner in this department.

So if you're heading out this week to buy the Blu-Ray of Man of Steel I recommend you pick this issue up-along with the first three if you missed them-as another vision of the Last Son of Krypton, one that captures the spirit of Siegel and Shuster's classic character much better than the massive piles of broken buildings does.

I won't touch Man of Steel by a mile, but it's great to know that artists still get the Superman character.

It's a good take on Superman. As for Man of Steel head to Youtube and type in Honest Trailers Man of Steel. It pretty much hits on everything wrong with that movie with some biting humor.

That honest trailer is awesome! "But my god what a beefcake!" I also love the "Robin Hood dads", very clever indeed!

I'm currently watching this (shall I call this a movie?) bits by bits at my dvd store, and I think Pa Kent's death ranks amongst the most ridiculous death scenes I've ever seen.