Comic Review: Lord of the Jungle #7 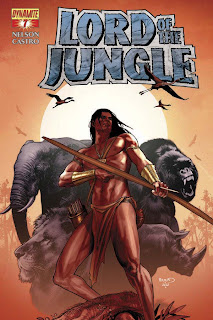 This week's other comic book review finds the Lord of the Jungle fighting for his life...on the streets of Baltimore!
While Jane comes to terms with her decision to stay and marry Cecil Clayton, Tarzan has taken a job as a construction worker to raise funds to return to the jungle. But it isn't too long before he comes face to face again with Robert Canler, the man who Jane's father owed money to, as he attempts to extort Tarzan's boss. Eventually the ape man's sense of right and wrong puts him the line of fire as Canler decides that this city isn't big enough for the both of them.
Following the setup used in their Warlord of Mars series, Dynamite and writer Arvid Nelson are providing original bridging stories leading up their adaptation of the next novel. While I can understand that, this one is a mixed bag story wise. Probably the most interesting concept is returning Canler to the story since Edgar Rice Burroughs never brought the character back but his portrayal here as a local crime lord is a little hard to accept for this reader. Also a running plot establishing a mysterious character with a Russian accent is a little on the nose for fans of the books even though I like this build up. On the other hand having Clayton act like a jerk in a scene makes it harder to understand why Jane would stay with him and undermines his character. Finally seeing Tarzan scaling high rise structures is cool. Ultimately the story is OK but I'll be glad to get to see how Nelson and company handle The Return of Tarzan.
The artwork for this issue is by Sergio Fernandez Davila and he does a pretty good job capturing the characters, even though they seem a little drab with the color choices for this issue compared to the previous issues. Also backgrounds tend not to pop well but that is nothing new here. I wish more work would be done in that area but for now Davila's work gets a solid A for effort.
So consider this issue a solid if not remarkable breather until Tarzan's return and we'll leave it at that.
at September 02, 2012

I personally wished they had kept Castro as the artist. Davila's design of Tarzan made me think of Superman, too bulky, and his hair was even longer than Castro's version. I got used to it by the last few pages, so I guess that was alright, but still...