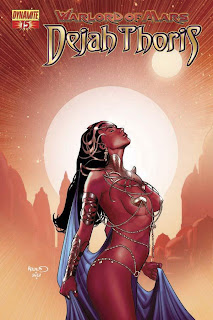 Well this was fast.

Still filled with regrets over her actions after being possessed by the Boora Witch, Dejah has left her family and Helium. This issue opens with her making a crucial decision-to head down the River Iss and ask the goddess for forgiveness. But before she makes it too far, she rescues a child, Ko, from a giant insect and promises to return her home. Once there in the city of Kaol, Dejah discovers they are under attack by the insects known as Sith and agrees to help the Jeddak Kar Tith. This action leads to danger and a possible redemption for the princess.

Pretty much a stand alone story, writer Robert Napton does a good job portraying Dejah's guilt and her desire to repent for her actions in the previous storyline. Most of the issue though is silent, filled with action sequences as Dejah risks her life to save the people of Kaol from the Sith. Still there is some touching moments between Dejah and Ko.

For the artwork in this issue we get a new artist, Marcio Fiorito. He does a good job capturing Dejah and the characters. He also makes the Sith a creepy looking insect and manages the action packed issue well. Some cases his work does resemble previous artist Carlos Rafael which can fool you into thinking Rafael's work on the series. That said at least it isn't as jarring as the various artists changes on the Warlord of Mars series. And a quick note-there is some NSFW shots for those squeamish about such things.

All in all it's a pretty good stand alone issue for fans of this series and Dejah Thoris. So take a chance and enjoy it.
at September 23, 2012

The art is good, but I hope Carlos Rafael returns.