Back to Barsoom's John Carter Screening 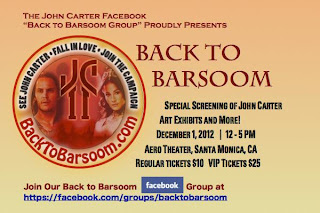 Some news for you fans of the film. The Facebook Back To Barsoom Group has announced a special screening of John Carter, set for December 1 at the Aero Theater in Santa Monica, California. Tickets are on sale and can be purchased here http://www.indiegogo.com/backtobarsoom1. The screening will have displays and special guests as reported at http://thejohncarterfiles.com/2012/09/john-carter-sequel-group-announces-back-to-barsoom-screening-of-john-carter-in-los-angeles-december-1/. Just FYI.
at September 28, 2012