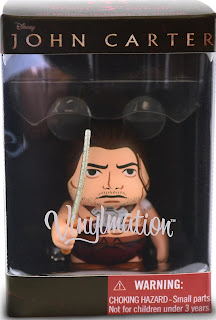 As a few of you might remember, prior to the release of the movie there was word that Disney would produce a series of Vinylmation figures to be sold at their theme parks. Well it looks like the figures have been released for sale on the Vinylmation website as a Facebook exclusive. You can go to http://vinylmation.shopigniter.com/series/facebook-first-and-online-exclusives and get John Carter, Tars Tarkas and a White Ape (there was also supposed to be a Dejah Thoris figure so I'll check back later to see when it goes on sale).
at September 15, 2012