What The Future Will Bring... 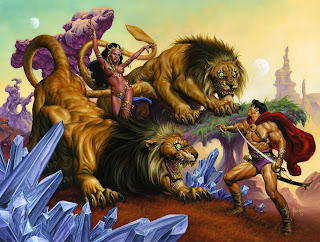 As I'm sure some of you have read Disney has now officially given up on John Carter (if you haven't go here http://www.huffingtonpost.com/2012/03/19/john-carter-bombs-disney-lose-200-million_n_1365659.html). At this point there are more better writers out there than me that will be dissecting the film and its poor showing at the box office. The reason I'm writing is to talk briefly about where this blog will be heading in the future.
When I started back in 2009, originally it was just going to be a chronicle of my rediscovery of the world of Barsoom and the works of Edgar Rice Burroughs that I had fallen in love with as a geeky 13 year old when I was given A Princess of Mars. Of course at the time the movie seemed to be a sure bet and indeed most of this blog has been given over to coverage of the film. But now that the film is a done deal-and unless it suddenly turns around or becomes the biggest selling DVD or Blu-Ray ever I doubt a sequel will be going-I have to decide where to go. So here's the deal: for the future I guess I'll be going back to the past a bit, which means reviewing books, comics and the occasional bit of movie news that sparks my interest. And even with the disappointing treatement Disney has given John Carter there is still much to look forward to: new books inspired by ERB like the upcoming Jane: The Woman Who Loved Tarzan and the possible Skies of Venus; the continuing comic book adventures of John Carter, Dejah Thoris and company fron Dynamite Comics and Marvel-which will be releasing the first issue of their adaptation of The Gods of Mars this week; not to mention a slew of movies and TV shows-from Game of Thrones to The Avengers to The Hobbit-that I'll mention on and off.
So to paraphrase the immortal words of John Carter "This Blog Still Lives!" As long as you guys are interested I'll be here.
at March 20, 2012

Nice job on the site. It was always a good place to come for JCM news and updates. Thanks, Jeff

IF ANYTHING I WISH YOU WOULD POST MORE PICTURES AND VIDEO CLIPS AND WALLPAPER !!!

I´m a newbie. I hadn´t read ERB before. I have a problem with damsels in distress. I loved the movie, every minute of if, the ships, Deja Thoris, John Carter...pity how it looks like Disney itself is burying it. I´ll check the blog with more detail and comment. Greetings from Pamplona