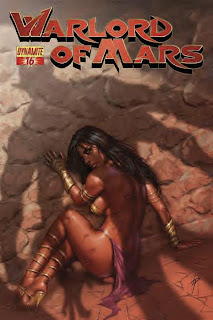 While the film sequel seems up in the air, we continue with Dynamite's adaptation of The Gods of Mars...
As this issue opens John Carter has just met his son Carthoris and the two stage an escape from the arena of the First Born. While they make their effort, the "goddess" Issus escapes and leaves the two to die under Omean but Carthoris knows the way out and after retrieving Xodar they escape the hell of the Valley Dor. On route the find Tars Tarkas-who has become separated from the maid Thuvia-and are picked up the Xavarian, the flagship of Helium and its captain-old pal Kantos Kan. Unfortunately Dejah Thoris has disappeared and is feared to be heading to the valley but before John can rescue her Xat Arras-now the acting Jed of Helium-orders them taken prisoner-and to be executed!
Moving pretty quickly, this issue runs through a lot of the plot. While there is some changes-and a bizarre comedy turn by Tars Tarkas that raises some questions about Thuvia (let's just say she talks in her sleep)-Arvid Nelson remains true to Burroughs' story-and after the movie's John "I don't care about your war-just my cave of gold" Carter-that's a welcome relief.
Again the same thoughts on the artwork by Carlos Salazar-it's growing on me, even if seeing Tars imitate Thuvia is quite funny. Still he captures the action-which there is quite a bit of-well and manages to keep the art work lively and interesting.
So once again another excellent issue. I'll be back with a few more reviews during the week so I'll see you next time folks.
at March 17, 2012